Negroni Week 2019 kicks off, changes at or, The Whale, and other food headlines from this week | Food | Pittsburgh | Pittsburgh City Paper

Negroni Week 2019 kicks off, changes at or, The Whale, and other food headlines from this week

The negroni was invented a hundred years ago in Florence, Italy, and there's no better way to celebrate than with Imbibe Magazine's annual Negroni Week.

The cocktail is traditionally made from equal parts gin, Campari (an Italian herbal liqueur), and sweet vermouth. You can shake it or you can stir it, but if it’s not garnished with an orange peel, you’re doing something wrong. It’s bitter, lightly sweet, and refreshing all at once.

Negroni Week is an annual cross-country celebration of the cocktail, started in 2013 by Imbibe Magazine and Campari. Across the nation, participating restaurants feature the Italian aperitif to  raising money for their charity of choice.

Join in the negroni fun! Negroni weeks starts June 24 and runs through June 30. Visit one of these participating Pittsburgh restaurants to get a taste of the cocktail, which you can find via Imbibe's website.

Negronis come in every form at Vallozzi’s. Check out the negroni colada, made with pineapple and coconut, or the smoke show, which adds a kick of mezcal.

Scratch Food & Beverage is celebrating Negroni Week with a trio: a white negroni, a black negroni, and a red negroni.

Look for a bubbly addition to the classic cocktail at Whitfield, which is donating on dollar for every negroni variation sold.

At Spirits & Tales, stick to a classic negroni or try the rum and ginger wine variation.

Proceeds from the negronis at Fl. 2 will benefit Core Gives, a nonprofit that supports families of food industry employees.

The fun doesn’t end with these five restaurants. Over 60 Pittsburgh restaurants and bars are participating in the celebration. Be on the lookout for Negroni Week specials, features, and more. 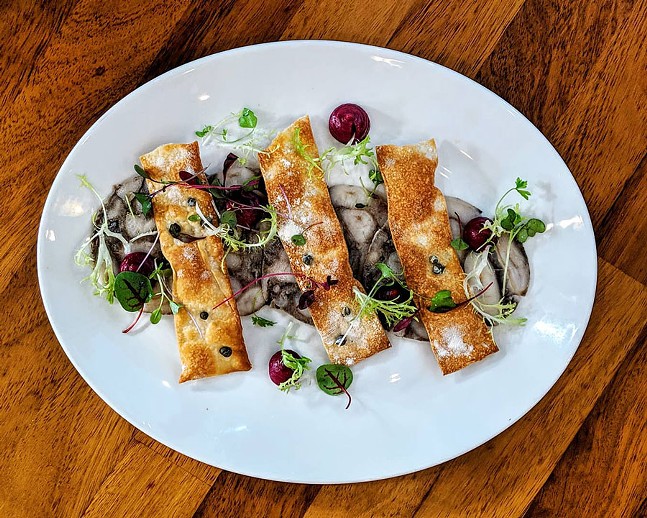 At the end of May, or, The Whale announced a change in leadership.

Two promotions mark a new chapter for the upscale Downtown restaurant: Eli Decko to executive chef, and Tim Kratt to chef de cuisine. Kratt comes to the restaurant with more than a decade of experience, working at Square Cafe, Smallman and Federal Galley, and as part of the opening team at Revel and Roost.

Last January, plans to renovate the Washington Education Center were announced. The building was set to transform into a TRYP hotel, a stylish Wyndham hotel designed to reflect a city’s personality, that would house two restaurants and 108 rooms. At the beginning of June, TRYP opened its doors, bringing with it one of the best rooftop bars in the city.

Over Eden is located on the top floor of the TRYP hotel in Lawrenceville. Huge, garage-door-style windows line the walls facing Downtown. On dry days, the windows are raised, adding another open-air feature to the bar. Outside, the rooftop bar delivers a stunning view of downtown Pittsburgh, Lawrenceville, Millvale, and the Allegheny River.

The cocktail menu is perfect for summer drinking. A short bill of cocktails includes shareable, summer punches, along with wine by the glass, and beer.

Brick Shop, the hotel’s bottom-floor restaurant, is coming soon. It will also be led by Blumenfeld.

Last week, East End Brewing released the second can in its “You Are Here” series, a beer for every neighborhood in Pittsburgh.

This can, named for Overbrook, is a hazy pale ale. The release follows the series’ inaugural brew, Allentown.

Overbrook will be released at both East End Brewing locations (Strip District and Larrimor) and at a special pop-up in Overbrook.

In July, DiAnoia’s Eatery is launching a dinner series that will bring traditional Italian plates to the table.

Each dinner will center on a specific region of Italy. DiAnoia’s co-owners, Aimee DiAndrea and chef Dave Anoia, are hoping to bring traditional, less common dishes to Pittsburgh diners.

DiAnoia’s Italian dinners will be held four times a year. To purchase tickets for the series’ first installment, visit dianoaseatery.com.