Needle & Pin, in Dormont, offers a fusion of British and Indian fare 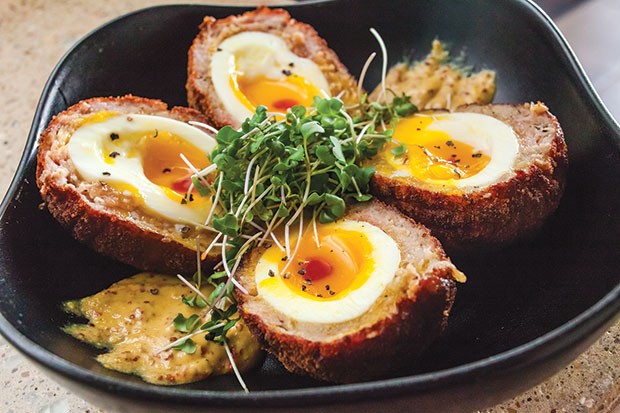 Cultures and identities are constantly in flux, and what we think of as the central foods of many national cuisines feature ingredients that haven’t always been there. Still, we were a bit leery when we first heard of a gin-and-curry-themed restaurant opening in Dormont. Undeniably, Indian ingredients and cooking techniques influenced the eating habits of colonial Brits, and vice versa. But would this be a problematic celebration of the Raj era?

While the menu at Needle & Pin is primarily British-Indian, almost nothing else about the place suggests imperial kitsch or the exoticization of the world’s most populous democracy. The design is smartly modern, with white marble tile, dark-stained wood and odd, yet fetching, wall art comprised of faux-grass checkerboards and botanical glass mosaics. A larger-than-life-size mosaic of an elephant above a little lounge area in the back of the dining room was the only overt reference to India at all, and a subtle and handsome one at that. Our only complaint about the premises was that it was awfully noisy.

Otherwise put at ease, we dove into the menu. Divided between smaller “plates” and larger “dishes,” the page-long list was a nearly even blend of curried British classics and English-inflected Indian foods, although (it comes as no surprise when you consider the culinary reputations of the respective nations) curry tended to win out, flavor-wise.

Deciding was tough. In the end, we got nearly half of what was on offer, and for shockingly little money: four plates, two dishes, and two fancy cocktails barely topped $100.

Jason loves Scotch eggs, but they do tend to be a bit … heavy. Needle & Pin didn’t mess with the essential formula, but they only cooked the egg seven minutes and didn’t go overboard with the housemade sausage coating. Scotch eggs tend to be paired with hearty, bold sauces. Nobody would consider a curry bland, but the spicing in the sambal mustard was much subtler, and a wonderful complement to this more refined version of the British pub staple.

When we ordered the cumin-crusted lamb lollipops, we were just as excited about the cucumber slaw, but that turned out to be too watery to provide much punch. Fortunately, the lamb — available as two bones or three — made up the difference, with some char and a flavorful Bengal-spiced cilantro emulsion that was a bit like a creamy chimichurri.

Curried-chicken pot pie came topped with a big square of ethereally crisp puff pastry, beneath which finely shredded chicken and carrot chunks reposed in a rich, mildly spiced gravy. A good choice for the timid, this was tasty and professionally prepared, but rather staid as a whole.

Our final small plate was actually two-in-one and its reference — grilled cheese and tomato soup — as familiar to Americans as to Brits: tikka grilled cheese with curried-coconut tomato bisque. The sandwich — with cave-aged Gruyere and white cheddar plus onion jam on crusty, thick-sliced farm bread — was excellent on its own, but together with the soup, amazing. The roasted-tomato base took on a distinctly subcontinental inflection with garam masala warm spice blend, kashmiri chili powder and shredded coconut to give the soup a bit of texture and underscore its slightly sweet notes.

We also went full-on tikka with Needle & Pin’s interpretation of chicken tikka masala. The rich, complex tomato sauce was served with shredded roasted chicken breast and thigh for a pleasing mix of white and dark meat, and chopped vermicelli noodles were a surprisingly good substitute for rice. The “English tea biscuit” in the menu description turned out to be a small square of the same heavenly puff pastry we’d so enjoyed atop the pot pie.

A lot was happening with the bangers and mash. It started with traditional British sausage and got creative from there: Potatoes were mashed with ghee (Indian-style clarified butter) and turmeric, turning them a vibrant yellow-orange, and then wrapped in puff pastry, which added texture, of course, but also doubled down on richness, especially as it absorbed the jus and tamarind chutney in which it rested. There was a certain similarity to the pot pie, with humble foods both fancified and fused to Eastern flavors. But this dish packed more punch, thanks in part to the chutney, the sweet spice of which helped cut the otherwise pervasive richness.

Needle & Pin neither negates the socio-political context of the food it serves, nor confronts it. Its focus is, rightly, on the food, a historical culinary fusion prepared with creativity and skill.