“We’ve already had a lot of guest interactions where they’ve had kind of this eureka moment.” 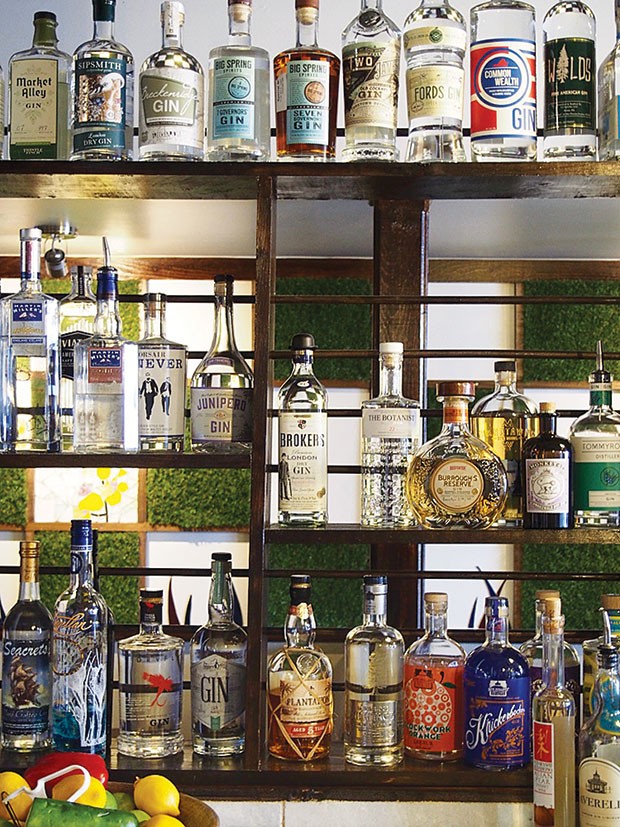 Americans are obsessed with whiskey. Bourbon sales are booming, whiskey bars continue to pop up across the country, and rare bottles fetch eye-popping sums. While whiskey certainly has a key place in the cocktail world, many connoisseurs would argue that aged spirits are best on their own. Needle & Pin, a new British-Indian restaurant in Dormont, highlights a versatile spirit with an even more impressive cocktail pedigree: gin.

If you were tempted to stop reading at the mere mention of that word, you’re not alone. Whether turned off by the prominent pine flavor or nauseated by a bad night in college, plenty of people think gin just isn’t for them. But Colin Smith, the chief operating officer of Needle & Pin, aims to change all that. “We’ve already had a lot of guest interactions where they’ve had kind of this eureka moment,” he says. “Where they’re like, ‘Wow, I had no idea this even existed.’”

Needle & Pin’s expansive gin list helps ensure there’s something for everyone. “Right now we’re in the eighties, with some more rare gins coming,” says Smith. “I don’t know that we’ll ever stop collecting. It’s a passion of mine as much as it is a business model.” Though gin, by definition, must contain juniper berries, not all versions of the spirit highlight juniper’s distinctive, resinous flavor. Some are floral, some are citrusy, and some even veer toward whiskey. And the list boasts gins from all over the world, including bottles from Japan, Iceland and Spain.

Of course, gin is a spirit meant to be mixed, and Needle & Pin takes that job seriously. For gin and tonics, for instance, Smith makes five varieties of homemade tonic, each designed to pair with a different style of gin. For martinis, bartenders use a thermometer to guarantee that every drink goes out at exactly 24 degrees Fahrenheit. And for his personal favorite, the Gibson, he makes his own house-pickled onions.

Gin is at the center of everything Needle & Pin does; the restaurant’s name comes from Cockney rhyming slang for gin. And that spirit is what ultimately led Smith and his team to the restaurant’s British-Indian ethos. “The tradition of how gin grew and became what we know of today has way more to do with India than anyone would ever even believe,” he says. Reflecting the fusion approach they take in the kitchen, the list of original cocktails plays with a globe-spanning selection of ingredients, including kumquats, Thai chiles and English cucumbers.

Though gin might have an upper-crust reputation, Needle & Pin aims to be a welcoming neighborhood restaurant and bar. Smith encourages guests to order in rounds, ask plenty of questions, and linger as long as they like. “At the end of the day, all we care about is making the guest happy,” says Smith. “Everything else is a side effect.”

Beer of the Week: Kellerbier