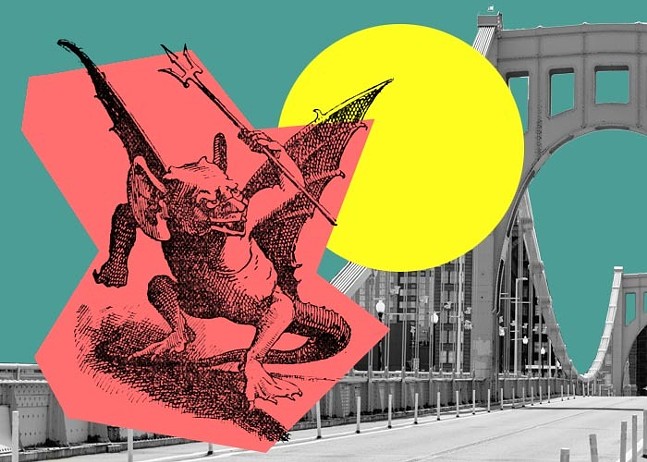 CP Illustration: Lucy Chen
In Pittsburgh, locals call being nosy and gossipy “nebby” and Pittsburghers looooove to be nebby. And while nebbiness used to be confined to water coolers, neighborhood meetings, or chats on the porch, modern-day nebbiness can now be found online.

The nebbiest posts are usually found on Nextdoor.com — a social media site for sharing neighborhood happenings that is sometimes filled with paranoia — but nebby posts can really be found anywhere on the web: Facebook groups, Twitter, and even online comments and reviews.

Pittsburgh City Paper is setting out to collect the best, craziest, and non-offensive nebby posts from across the region, and will be sharing them on a regular basis. Some of the more memorable recent posts have included: a search to identify mysterious poops in Squirrel Hill, a lost chicken who won't leave a neighbor's yard in Homewood, and someone allegedly leaving random fruits in a neighbor's yard in West View, aka a “drive-by fruiting.”

This week, a poster took to Pittsburgh Reddit to ask if the city had a visit from the Prince of Darkness himself after a late-night stench was so bad, they could think of no other possible answer.

"Did Satan just visit Pittsburgh? If not, what's that stench?" reads the post, which CP removed identifying information from. "Just went upstairs to 'go to bed' and we were slapped with the burning noxious fumes of sulphur [sic]. Surely it can't just be our hood or house. What are these deplorable plants doing now? EPA app states the air quality is okay but my lungs and asthma are saying otherwise. Is anyone else out there trying to plug their noses tonight? It's such a shame, such a wonderful city and it perpetually has to smell of hell ..."

The post only has 10 replies, which is surprising, seeing as how Pittsburghers are usually quick to jump in on any thread comparing the city to damnation.

Those who did reply included guesses that the poster was smelling an inversion, a weather phenomenon occurring when the air on the ground is quite warm but cold air masses above it in the atmosphere trap pollutants near the surface. (Inversions occur about 157 days a year on average in Allegheny County, according to the Allegheny County Health Department.)

"First time I experienced this I searched the entire house at 1 am because I was absolutely sure the dog had shit somewhere," one Reddit user responded.

Someone also recommended the poster download Smell Pittsburgh at smellpgh.org, an app developed by the CMU CREATE Lab. Users can submit foul odors to the app, which then notifies the Allegheny County Health Department of all complaints.

Another guess was that the smell was coming from "a train loaded with garbage that occasionally passes by Amtrak station and cruises over the river. It runs adjacent to the port authority East busway into town. Anytime that comes through it's damn near unbearable for hours."

But in true Pittsburgh Reddit fashion, there was the jab:

"It's your weekly reminder why housing prices are low relative to the nation."

CP is going to keep sharing the best nebby posts when we find them, as often as we can, but we also would love our readers to help. If you come across a funny, interesting, or particularly nebby post, please send it our way to ryandeto@pghcitypaper.com. We will remove any identifying information from the post. (Please don’t send any racist, transphobic, or otherwise offensive content, we have no intentions of amplifying those.)