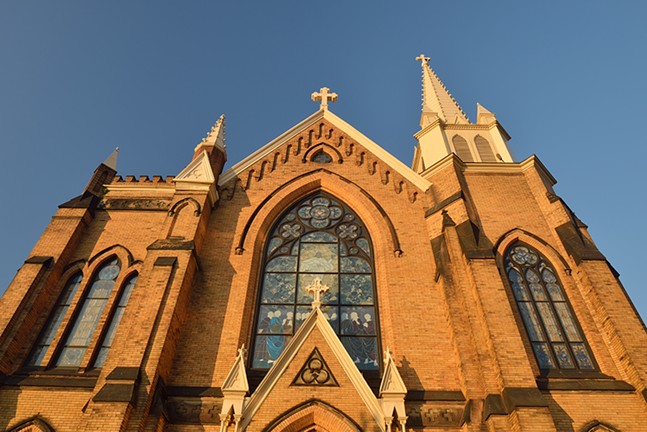 Within Pittsburgh’s Catholic Diocese, 99 “predator priests” have been revealed in a grand-jury report released by Pennsylvania Attorney General Josh Shapiro.

The Pittsburgh priests are accused of using “whips, violence and sadism in sexually assaulting their young victims,” according to the report.

Shapiro said the two-year investigation is U.S.’s most comprehensive report on child sexual abuse within the church.

“Pennsylvanians can finally learn the extent of sexual abuse in these dioceses,” said Shapiro in a press release. “For the first time, we can all begin to understand the systematic cover up by church leaders that followed. The abuse scarred every diocese. The cover up was sophisticated. The church protected the institution at all costs.”

In total, 301 priests were identified across Pennsylvania. More than 1,000 victims offered detailed accounts of abuse. The grand jury believed the actual number of abused children was in the “thousands.”

In Pittsburgh, the report alleges an 18-year-old victim was forced to strip naked and stand on a bed, while priests took pictures of the victim posing as “Christ on the Cross. Those photo were allegedly added to a collection of child pornographer that was share on the church grounds.

The sexual-abuse accusations in Pittsburgh stretch decades, starting in 1940s to 2018.

Washington, D.C.-based Cardinal Donald Wuerl, who was a former Bishop in Pittsburgh, issued a statement address the report.

“As I have made clear throughout my more than 30 years as a bishop, the sexual abuse of children by some members of the Catholic Church is a terrible tragedy, and the Church can never express enough our deep sorrow and contrition for the abuse, and for the failure to respond promptly and completely,” said Whurl in a statement. “While I understand this report may be critical of some of my actions, I believe the report confirms that I acted with diligence, with concern for the victims and to prevent future acts of abuse.”

Many of the Pittsburgh priests accused of abuses have already been expelled by the church, and some have faced criminal charges.

The grand jury recommended four actions be taken in response to the report: eliminate the criminal statute of limitations for sexually abusing children; create a “civil window” so older victims may now sue for damages; clarify penalties for a continuing failure to report child abuse; and specify that Civil Confidentiality Agreements do not cover communications with law enforcement.

Shapiro supports these measures. “Adopt and support each of these recommended reforms to Pennsylvania law – now,” Shapiro said. “Stand up today and announce your support for these common-sense reforms.

Pennsylvania House Majority Leader Dave Reed (R-Indiana) indicated support within the House to pass Senate Bill 261, which would eliminate the statute of limitation on child sex-abuse crimes. He expects a vote in the fall.

“The actions revealed through the grand jury report are heinous and shameful,” said Reed in a statement. “We cannot allow safe havens for child sexual predators; it is a betrayal of justice. With the timeliness of this report and its findings, the statute of limitations bill passed by the Senate is primed for discussion in the House.”