CP Photo: Kimberly Rooney
Swiansons lorikeet looks at Pittsburgh City Paper staff writer Kimberly Rooney during the Lorikeet Feeding.
The National Aviary has had a busy week. After days of Pittsburghers searching the skies for Kodiak, the missing Steller’s sea eagle, the Aviary recovered Kodiak in Pine Township on Oct. 3. Kody, as he’s endearingly called, was born in a facility accredited by the Association of Zoos & Aquariums before coming to Pittsburgh, but in the wild, Steller’s sea eagles prefer forested habitats with large trees.

Now that the Aviary has reopened, visitors will have the opportunity to learn more about other forest-dwelling birds in the Aviary’s Forests programming, which began on Sept. 8 and will continue through Jan. 3. The daily programming features encounters such as Meet an Eagle or Forest Friend and Barred Owl Talk, along with bird feedings and a seasonal species guide to bring attention to forest birds in each of the Aviary’s habitats.

The Forest programming focuses on species that rely on forests, including humans, and what people can do to help conserve and protect them. I got a chance to experience the Tropical Rainforest Feeding as well as the Lorikeet Feeding, both of which allowed up-close observations of the birds as experts taught participants about the birds and their habitats.

The Tropical Rainforest Feeding lasted about 10 minutes, but in that time, visitors are able to see birds ranging in size from Gus, the great argus pheasant whose tail feathers alone are about four feet long, to the approximately foot-and-a-half long marbled teals named after coffee, including Mocha, Espresso, and Latte.

The birds’ personalities were also on display, from the more aloof and graceful snowy egret who stalked the railing in search of food, to the bolder Victoria crowned pigeon who hopped along the deck where visitors stood, trying to pick up any stray worms. The feeding also showed off various feeding styles, including fly-bys from superb starlings who hunt while in mid-air for safety. The expert conducting the feeding also taught visitors about various conservation efforts for the birds, pointing out which were endangered and talking about the programs in place to repopulate and eventually re-enter birds into the wild.

“We like to set birds — any animals, really — up for success,” says Toth. 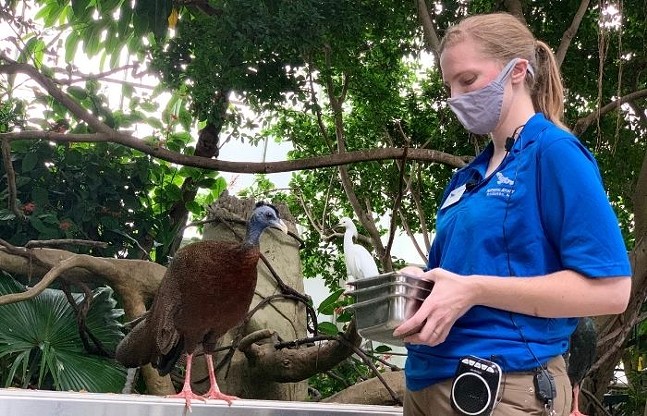 CP Photo: Kimberly Rooney
Gus the great argus pheasant waits to be fed during the Tropical Rainforest Feeding. A snowy egret perches in the background.
The Lorikeet Feeding allows visitors to get up close and personal with the colorful rainforest birds. Swainsons lorikeets, which have red chests, and marigold lorikeets, which have yellow chests, make up the approximately 25 lorikeets nestled among the branches and leaves. But from their quick movements as they flitted from one end of their enclosure to the other and their very, very loud calls, their number seems greater.

The feeding only lets small groups in at a time. Each participant is handed a metallic cup that has drops of nectar in the bottom, and as they walk into the enclosure, the lorikeets descend on their arms and hands to get a taste. Only four lorikeets rested on me at any given time, although the one that perched on my shoulder was quickly guided off, since the birds are trained not to land on heads or shoulders.

The lorikeets’ zygodactyl feet — meaning feet with two toes facing forward and two facing back — were slightly ticklish as they gripped my wrist, but the greatest shock came when the nectar was gone and one particularly pertinacious lorikeet decided to lick the area between my thumb and forefinger in the hopes of finding one last drop of nectar.

As the Aviary expert who was guiding the feeding told me, “Most people don’t think about parrot tongues.” I was no exception until that moment. But as pollinators, it’s important for lorikeets to swish their bristly tongues around the inside of flowers.

The Lorikeet Feeding only took a few minutes, giving me plenty of time to visit other habitats, such as the Grasslands area, where smaller birds chirped musically and hopped along platforms and branches. A stroll through the Wetlands area allowed me to experience the deep, throaty call of the black-faced ibis, which was perched on top of an enclosure and stared down at me as it released what sounded like an ancient god’s laughter.

Regal Andean condors as well as elegant demoiselle cranes were on display in Condor Court, and for those who couldn’t get enough of Kody during his stint in the Pittsburgh news cycle, he will be back in the Eagle Hall after a period of rest behind the scenes.

Goodlander to host block party in Larimer with cocktails, live music, and more