A foreign cuisine is a multifarious thing, with different regions and recipes favored by different kitchens, and varying amounts of infiltration by local ingredients and traditions. And then, depending on how long it has been popular in American restaurants, a given cuisine may be layered, like a pastry, with the preferences of succeeding generations.

So it is with Italian cuisine, which has long held one of the most venerable places at the American table. Before the modern, seasonal Italian cooking of today, there were the regional Italian cuisines that defined fine dining in the '80s, and before that, what we now think of as the old-school Italian-American tradition, served on white tablecloths with red sauce and raffia-wrapped bottles of chianti.

Nardi's, high atop Monroeville's singularly skyscraping Jonnet Building, is just a few years old, but its style and its menu date back decades. In its elegant dining rooms, Nardi's serves up plenty of chops, veal and pasta dishes that owe more to Little Italy than to the Old World. We were ready for professional service and good food prepared according to recipes that would make your great-aunt nod in approval.

But first, we enjoyed cocktails in the piano lounge, gawking at the panoramic view of acres of retail roofs, lanes of traffic and distant, green hills. It was not exactly the Top of the Triangle, but with that local landmark long gone, this is as good as it gets for skyscraper dining around here. And it really was a charming experience, with a bartender who knew his stuff and the Great American Songbook being played by a real, live pro.

The slab style of the building has resulted in dining rooms flanking a longish central hallway. In it, being led to our table, we felt a bit cramped, but the dining rooms themselves were well proportioned, and from our window seats we were able to watch the sky darken and the taillights brighten as night fell over the Miracle Mile. In keeping with the old-school vibe, we ordered crab Hoelzel, a dish created at the Duquesne Club during its Mad Men-era heyday. There's not much more to it than salt, pepper, tarragon vinegar and lots of big lumps of sweet crab, and Nardi's got it just right. Some kitchens overwhelm the crab with pepper, but here the dressing added flavor without distracting from the succulent meat.

Angelique's favorite, greens and beans, wasn't nearly so successful. Both titular ingredients were overcooked, resulting in limp escarole and mealy beans, while the cooking broth was underseasoned and unspiced; in a word, flavorless. We were glad we'd ordered the optional sausage. An entire link reposing plumply atop the mushy fare, it was the dish's only source of savor, and had even been browned for a bit of extra flavor.

We wished the greens and beans could have been more like the creamed spinach. This is a dish that can exemplify 1950s American cooking: Take a perfectly healthy leaf, chop it, boil it and drown it in fat. But Nardi's brought creamed spinach into the 21st century with whole baby-spinach leaves, merely wilted and tossed with enough cream to coat and enrich.

The house salad was in keeping with the throwback theme; unfortunately, the salads of yore lacked the garden-freshness with which we 21st-century diners have been spoiled, and Nardi's is all too faithful. Mesclun greens were present and accounted for, yes, but too much pale romaine and lackluster olives wiped out whatever advance that might have represented.

Pasta with marinara sauce was candy-sweet, perfect for our toddler, perhaps, but less appetizing to the adult palates in our party. We hoped that classics like veal saltimbocca and Virginia spots would be right up Nardi's alley, but disappointment soon settled upon these dishes as well. While the flavors of the saltimbocca -- prosciutto, herbs and provolone -- were pretty good, the veal in which they were rolled was tough and bland, more reminiscent of indifferently prepared chicken than this tender cut of meat.

Meanwhile, spots are renowned for their light, sweet flavor, and the English-style preparation of light breading and pan-frying is perfect for enhancing this simple, satisfying profile. But here the fish flavor was too strong. These spots wanted a sauce or some more complex seasoning to balance their oily flavor.

Angelique's perch, a special, was more successful. Simply sautéed with butter, salt and pepper, and finished with a bright squeeze of lemon, this sweet little white fish, one of Angelique's favorites, retained its delicate character.

We believe that Nardi's version of old-fashioned Italian fine dining still has a lot to offer, and Nardi's embodies many of its charms, including friendly and attentive service. But the few very satisfying dishes we had weren't balanced by the recipes -- too many of them, especially at these prices -- that left us wanting. 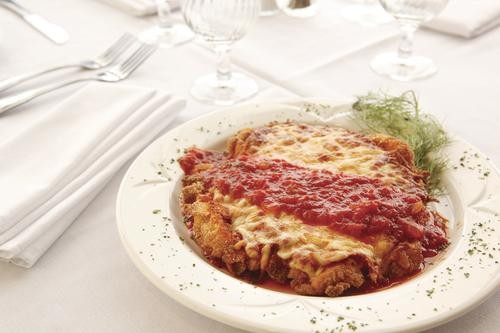