“I hope people feel inspired to accept themselves.” 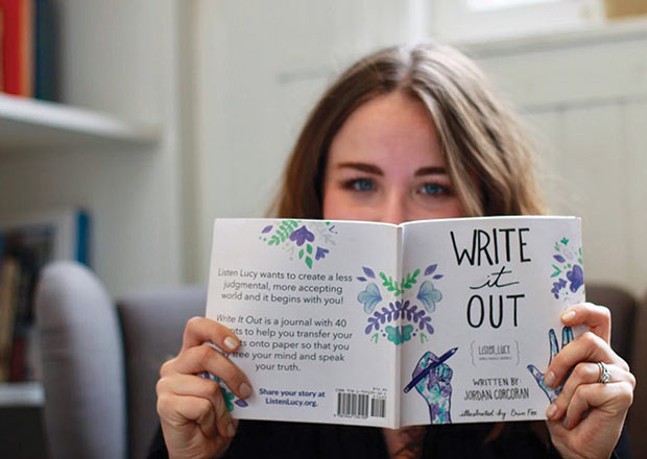 Author Jordan Corcoran was diagnosed with generalized anxiety disorder and panic disorder when she was a freshman in college. One of the biggest struggles she faced at the time was being able to effectively communicate what she was experiencing.

“Mental illness is a very lonely illness if you don’t have the tools to communicate,” Corcoran says. “I had this amazing support system, but I didn’t have any idea how to explain to them what was going on.”

So the Pittsburgher turned to writing.

“I would write about panic attacks, I would write about what was stressing me out, and I would work through it,” Corcoran says. “And as I slowly started to write more and more, I began to heal, and it gave me the ability to speak on something that was consuming my life.”

Next week, Corcoran will be featured in the first of a four-part reading series focused on mental health and hosted by NAMI Keystone Pennsylvania, a mental-health nonprofit, and arts organization City of Asylum.

Corcoran has essentially livestreamed her battle with mental health via social media over the past five years. And in her book, Write It Out, Corcoran gives readers 40 writing prompts to put a voice to their own struggles, even if they’re the only ones who ever read it.

“I hope people feel inspired to accept themselves,” Corcoran says. “They are worth fighting for their health and taking care of themselves. Life is busy, and we’re all going in a million different directions, but we need to keep our mental and physical health as a top priority. The first step to that is accepting who you are.”

At the Stories That Heal event, Corcoran will ask the audience to respond to a few of the prompts from her book. But she won’t ask them to share any personal experiences she isn’t ready to share herself. Before each of the writing prompts, she’ll share her own stories — from her most embarrassing moment to how she has dealt with the death of a loved one.

“I hope that inspires them to not feel ashamed of what they’re going through, but to take control and take back some of that power that they lost when they were in the darkness of their struggle,” Corcoran says. “I want them to see the light is there.”

Corcoran’s session promises to achieve what NAMI set out to accomplish with the reading series.