With its extensive, authentic menu, this new Shadyside restaurant is a top contender for the ultimate, authentic Korean dining experience in Pittsburgh

Just because Pittsburgh currently lacks a large immigrant population doesn't mean we don't have authentic foreign cuisine. We do still have immigrants, after all — if in smaller numbers, then arguably from a more diverse geography than ever before. And opening a restaurant is a time-honored way for new arrivals to find a foothold in the local economy by plying an undisputed specialty.

But there is a difference, we think, in the way that smaller, tighter communities like ours adopt foreign cuisines. Instead of becoming fluent in them through full immersion, we tend to hold dear one or two iconic, gateway dishes, like Mexican tacos, Japanese sushi and Vietnamese pho. Once these have become established, often after several years, we are primed to explore and embrace a broader, more authentic menu.

If this theory holds, then the opening of Nak Won Garden marks the full-fledged arrival of Korean cuisine in Pittsburgh after a decade or more of enthusiasm for Korean barbecue. Open since November on busy Centre Avenue, at the seam of Shadyside and Bloomfield, Nak Won Garden is Pittsburgh's most ambitious Korean restaurant to date. 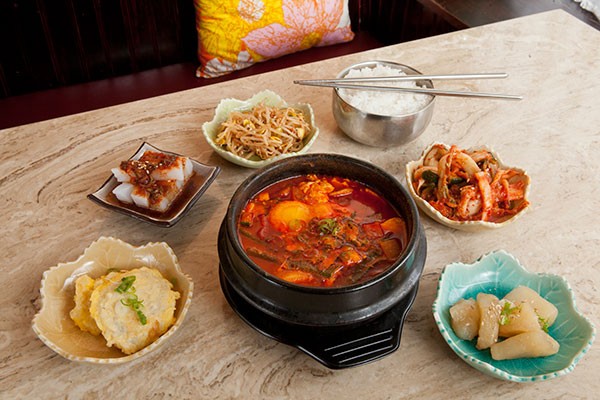 Photo by Heather Mull
Seafood soondubu (center) and side dishes

Polished marble tabletops lend gravity to the deep, narrow storefront (a former flower shop), but the real draw is an extensive menu consisting mostly of dishes not on offer anywhere else in town. Even the inevitable Korean barbecue section was full of novel cuts and meats, such as duck sirloin and pork neck. We liked seeing many of our fellow guests chatting in Korean with co-owner Yang-Suk Beondy as she stopped by each table in turn. Beondy, who is Korean by way of Los Angeles, opened the restaurant with her brother, Chung-Chu Yi, and daughter, Christina Beondy.

We dove in with an order each of steamed and pan-fried mandoo (dumplings). The dumpling wrappers were wonderful. They were tender and translucent, the steamed ones offering just a hint of chew, the fried ones lightly crispy without a hint of toughness. The filling of minced beef and pork was combined with a bit of fluffy tofu and lightly seasoned with garlic, scallions and ginger. The flavor was subtle but straightforward and true, and the dipping sauce, chock-full of sesame seeds and more scallions, added plenty of extra punch.

A vegetable-seafood pancake was easily 12 inches in diameter and arrived sliced into wedges on an elevated platter, not unlike a pizza. But its structure was neither flatbread nor pancake-like, in the Western sense. It was more of a dense mass of just-cooked vegetables, shrimp and squid held together by a batter matrix that was fried until crisp and browned outside, while remaining soft and pliant within. It was a delicious riot of texture and flavor.

Nak Won has a lengthy list of individual entrees, but we were intrigued by the "casseroles," one-pot meals to share. Being unfamiliar with this genre of Korean cooking, we relied on our server, Christina Beondy, for guidance. She steered us toward the budae jigae, which she called the most popular. Like all of the four casseroles on offer, it's essentially a soup, prepared in the kitchen but finished at the table on a portable gas burner. What set this one apart was its ingredients, both listed — kimchi, ramen noodles, spicy bean broth — and unlisted: sliced hot dogs, Spam and American cheese. After the Korean War, Beondy explained, American GIs left their surplus rations behind, and resourceful Koreans figured out how to incorporate them into traditional dishes. 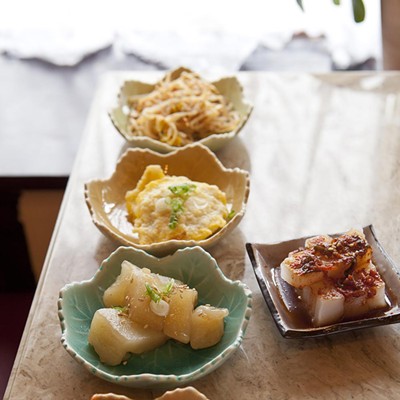 The result was gloriously delicious. The broth, spicy and bold, surrounded all the ingredients with its big, complex flavor, so that the unconventional meats — augmented with actual sliced pork — acted as part of a broad textural mélange. There were also watercress; enoki mushrooms, which, like the cheese, practically melted into the bubbling broth; and rice cakes, their chewy white cylinders epitomizing the texture-centric East Asian approach to dish construction.

"L.A. galbi" were marinated beef short ribs, sliced across the bone and served with sautéed onions over rice. Though their flavor, infused with soy, garlic and a little sugar, was excellent, their texture was a bit tough.

Also on our table were banchan, the many small dishes which are not so much side dishes as central components of any Korean meal. Ours included acorn jelly, burdock root, sprouted mung beans, steamed vegetables and, of course, kimchi. Each offered its own distinctive flavor, from earthy to fiery to sweet, to fully round the panoply of tastes and textures.

With its extensive, authentic menu, Nak Won Garden is a top contender for the ultimate, authentic Korean dining experience in Pittsburgh.