Nailed It! on Netflix is the absurd reality-TV cooking show you need 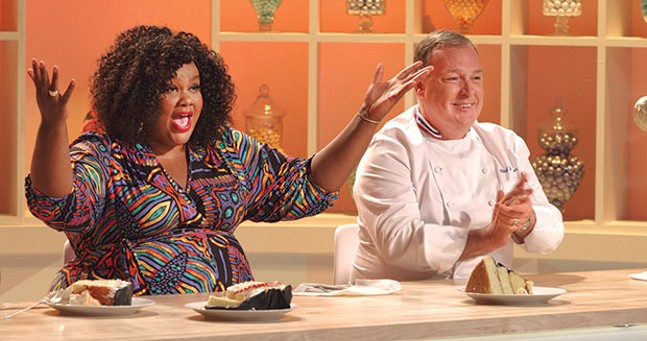 Photos courtesy of Netflix
Nicole Byer and Jacques Torres of Nailed It!

If that premise sounds like American Idol audition-tier cruel, you should know it’s mostly not. The challenges are nearly impossible — any semblance of success is lauded and the baldly hilarious missteps are treated sympathetically. There’s a lot of equivocating: This looks like melted garbage but the frosting is delightful! Everybody’s pretty nice.

Nailed It! taps into the well-worn reality-TV formula of allowing the audience to laugh with the subjects as much as they laugh at them. It’s not mean-spirited. The bakers seem as entertained by their mistakes as the judges. And the forced backstory-sappiness of most food show contestants is absent here. It’s very clear they know they’ll fail and that levity makes the whole thing easy to stomach.

Chalk most of that up to Byer, an Upright Citizens Brigade alum, who splits her time dropping well-timed one-liners and mugging excessively at the camera. There’s a subtle mockery of the entire premise in every line she lands, but it’s never disingenuous and it’s always funny. Her shouting “ya done!” at the close of every baking round makes me laugh uncontrollably every time. It should not be that funny.

Torres plays the resident expert, padding the comedy with tidbits of baking advice and occasionally playing the role of French heartthrob (he’s sort of this show’s Paul Hollywood). The “Queen of cakes,” 87-year-old Sylvia Weinstock, steals most of the first episode as guest-judge, throwing back vodka and landing some killer quips. I missed her for the rest of the episodes.

The season finale is probably the strongest. Building on the self-satire and absurdity of the preceding five, this episode is the most untethered. The guest is comedian and director Jay Chandrasekhar (Super Troopers), who disappears for the bulk of the episode to pick up his kids and returns later with iced coffees for the judges. Later, the final challenge involves baking a cake in the shape of Donald Trump’s upper body.

Nailed It! was an immediate success. There’s nothing cerebral about the show or its premise. The show was inspired by a meme of the same name, so it shouldn’t be a surprise that its sensibility is uncomplicated, silly and accessible. The only shocker here is that the final product is so sweet and satisfying. And lucky for us, season two is already on the way.