The iconoclastic Canadian director mulls over his hometown. Sort of.

Some time ago, a railroad company sponsored an annual treasure-hunt for the citizens of Winnipeg. First prize was a one-way ticket to anywhere, but the idea was that nobody would actually collect it: After you spent a whole day looking closely at your hometown (the thinking went), you wouldn't want to leave.

This anecdote may or may not be true, but it doesn't really matter, not in the world of Guy Maddin, the Winnipeg-born, Winnipeg-based filmmaker whose work is -- pardon the slight pun -- a maddening mix of Chris Marker (the experimental Swiss Marxist), Jean Cocteau (the French surrealist) and John Waters (who requires no parenthetical). He's always at once highly intellectual and yet something of a put-on, creating art films that unapologetically, even gleefully, deconstruct themselves.

Maddin shows us a map of Winnipeg's three rivers -- actually, a fork in one big river -- and then cuts back and forth between the map and a close-up image of a diminutive pudendum, leading finally to his craggy old mother. Our protagonist is, like Maddin, a Winnipeg native. In fact, his name is Guy Maddin, and he's played on camera by -- Darcy Fehr (gotcha!). But it's still Maddin's voice we hear narrating.

Maddin (the director) accompanies his alter ego's musings with scenes of people at work and play, sledding and dancing, riding trains and driving cars down shadowy back roads. Are we watching gorgeous, faded old black-and-white footage, or did Maddin create it all for his visual essay, a dreamlike homage-cum-dirge? There's no story in the conventional sense, but as the musings go on, a portrait emerges of a man who's both inside and outside of himself, searching for answers yet acutely aware that there are none.

My Winnipeg is equal parts existentialism and metaphysics, a state of being and a state of mind. All Guy has to do to get out of town is not leave the train before it crosses the city line. Will he make it? He has mother issues: She's "the most psychic of all Winnipeggers," a foul, bitter, white-haired woman with probing eyes, but also an actress we hear Maddin directing from off-camera to say her lines more effectively.

As Guy meanders through his life, the metaphor of the Sleepwalker meanders through the film, giving it a Caligari-like quality. Is Maddin our mountebank? Is being raised by a hairdresser-mother, going to school reeking of hair products, enough to scar a child for life? What is this all about?

It purports to be true, but it's all tongue-in-cheek, much of it played like a cheesy '40s melodrama, and rarely amusing, except perhaps for the brief burnt, frozen, buried horse-head sequence. "Everything that happens in this city is a euphemism," Guy tells us, and by "city," of course, he means "film."

Frankly, I found My Winnipeg to be less interesting that Maddin's other weird work, like The Saddest Music in the World (a musical, more or less) and Tales from the Gimli Hospital (just plain macabre). Those were totally incomprehensible. This one is just didactic and repetitive. A film like My Winnipeg should resonate in Pittsburgh, which has so many hometown residents growing old here, except perhaps that we all seem to want to stay, and Maddin wants to leave. Or so he "says." 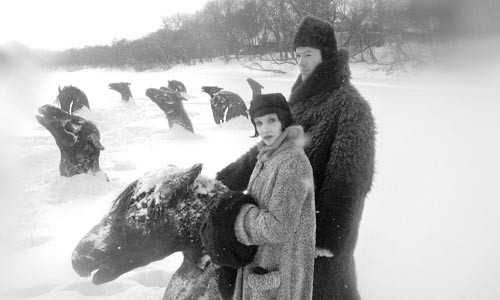