"My Feminism Will Be Intersectional Or It Will Be Bullshit": a take-away from the Women’s March on Washington | News | Pittsburgh | Pittsburgh City Paper

"My Feminism Will Be Intersectional Or It Will Be Bullshit": a take-away from the Women’s March on Washington

Women of color have long been left behind by the feminist movement in this country, which has historically benefited white women 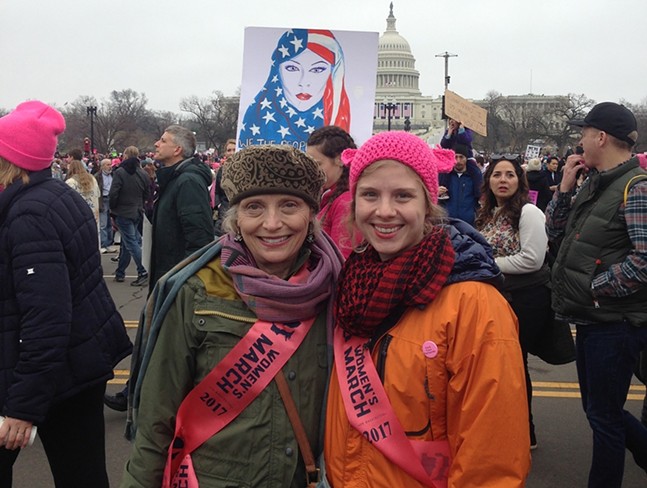 Right after the Women’s March on Washington was announced, I got an email from my mother.

I was hesitant. At the march’s inception, the coordinators had been critiqued for their lack of intersectional platform, for their exclusion of women of color in leadership positions and for co-opting the march’s original name, Million Woman March, from the 1997 Million Woman March in Philadelphia, when hundreds of thousands of black women marched in solidarity to bring attention to the unique systems of oppression black women face. Women of color have long been left behind by the feminist movement in this country, which has historically benefited white women.

Examples are easy to come by if you are willing to dip just below the shiny surface of the limited amount of feminist history most people know. The women’s suffrage movement fell far short of being a sunny, sisterly lovefest between all American women. In reality, it was extraordinarily divided by racism. So while women technically received the right to vote in 1920, African-American women were unable to freely exercise this right until the '60s. This discrimination applied to other women of color as well, and until the '50s, some states still barred Native Americans from the vote. While white women were fighting for the right to work outside the home, women of color had never known anything else, whether as slaves or as low-wage workers at the most grueling jobs.

In recent history, 53 percent of white women voted for a man who has admitted to groping women against their will; a man who is a liar, a racist and a xenophobe; a man whose anti-choice platform — backed by his assertions during the debates that doctors were willy-nilly ripping full-term babies from the wombs of “nasty” women — has now blossomed into a reinstatement of the Global Gag rule, legislation that bars government aid to overseas organizations that provide safe abortion access.

Now that I’m finished melting into the floor while screaming internally, let’s talk about how we can go about trying to change this situation and work toward tackling these issues in a way that is effective and supportive of those most affected.

Intersectional feminism, the platform that the Women’s March on Washington made an effort to move toward after being called out by women of color, can lead the charge. Intersectionality is a term coined in a 1989 essay by Kimberlé Williams Crenshaw, a black American professor and civil-rights activist. Intersectionality refers to the way that all the elements of a person’s identity, like gender, race and class, overlap and influence how that individual experiences oppression.

Think of each of my identities as a lens with a certain prescription; looking through each one changes what I experience. I am: a blond-haired, blue-eyed, white cis woman, with a low income but raised middle-class, queer and femme. Put them all together and my picture is different from anyone else's. As a white person, I experience a vast amount of privilege, but as a queer woman, things look different. No part can be examined without the other.

Eventually, I decided that in light of the changes that the Women’s March coordinators had made, I would attend with my mom and go with my ears open. It was important to me stand as a witness with others and to hear the words of feminist activists like Angela Davis, Sophie Cruz and Janet Mock (unfortunately, the sound system wasn’t able to handle the turnout for those far from the stage). I wanted to stand beside my mom, the person who taught me about feminism, and try to garner some energy for the fight to come.

With this election, many white women are experiencing, for the first time, a fraction of the burdens that trans and gender-nonconforming people, Latinx, black women, Muslims, refugees and immigrants have carried in this country for years and it’s scaring the hell out of them. White women, we’re long overdue. Start listening. Show up. Support the voices of those least heard in the feminist movements. Criticism will help us grow. One of the signs that has been going viral since the march says, “I’ll see you nice white ladies at the next #blacklivesmatter march, right?” That, my friends, is called being on message.

For me, the march was hopeful. While I will admit that my expectations for men’s turnout were low, I was heartened to see the numbers that showed up. I saw the most brilliant, stark examples of wit and passion and resilience on sign after homemade sign, held by families with three generations of women present. Although conditions were cramped due to turnout, I saw courtesy being practiced and large groups of strangers chatting on the mall.

I have so much yet to learn. I have so much more reading and listening and supporting to do with my feminist sisters and brothers. But having these dialogues and watching people of all shapes, colors, religions, ethnicities, sizes and abilities turn out on the same patch of ground for a collective stand against this encroaching dark night gives me hope that we can move forward in our fight for social, political and economic justice for women and all people. Still, I wonder, is this only what I see through my lens?

Not sure how to process this and get started? Here’s an intersectionality primer by Rowan Grigsby.

And for when you feel like the world might get you down, check out the most feminist show on T.V., Broad City, on Trump’s inauguration.

*Title taken from a sign seen at the Women’s March on Washington.