It's difficult now to understand what a monster hit Lerner & Loewe's My Fair Lady was when it opened in 1956. The show ran for more than five years and won six Tonys, and the cast recording reached No. 1 several times from 1956 through 1959. The new production at the Pittsburgh Public Theater is testament to the show's enduring appeal.

Based on Shaw's Pygmalion, it's the story of a flower girl, Eliza Doolittle, molded into a lady by brutal phonetics professor Henry Higgins. And between their battles, people sing some of musical theater's greatest hits: "I Could Have Danced All Night," "On the Street Where You Live" and "I've Grown Accustomed to Her Face." Shaw, who resisted offers to musicalize his play when he was alive, would have hated My Fair Lady. Lerner adds a romantic subplot for Henry and Eliza, a notion so repugnant to Shaw he wrote an afterword to his play in which he marries her off to another character altogether. 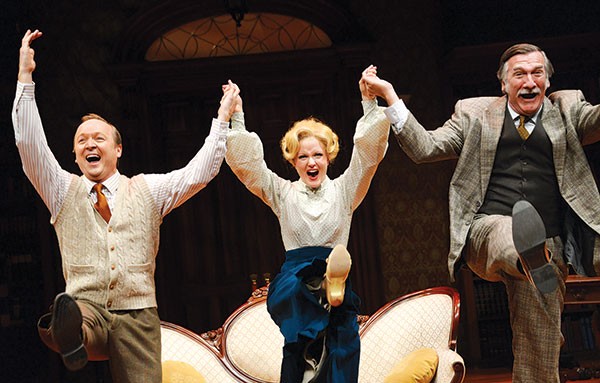 But you know what musicals are like. And so does Ted Pappas, director and choreographer of this Public production. Nothing else matters if you don't have the right performers, and Pappas' casting of this show and the solid performances he gets couldn't be more amazing.

Kimberly Doreen Burns charts a vastly entertaining path of transformation for Eliza and, when called upon, blows the roof off the joint with her singing. Benjamin Howes, in some sort of theatrical alchemy, makes Henry's sneering and bombast exquisitely charming. And John Little plays Pickering with just the perfect amount of avuncular morality.

Michael Schweikardt has designed a stunningly handsome back wall for the production, in front of which a lot of chairs get moved around to suggest various locales. It doesn't really work, but then I disapprove of people who go to theater for the scenery.

The Public's got a big hit on its hands.