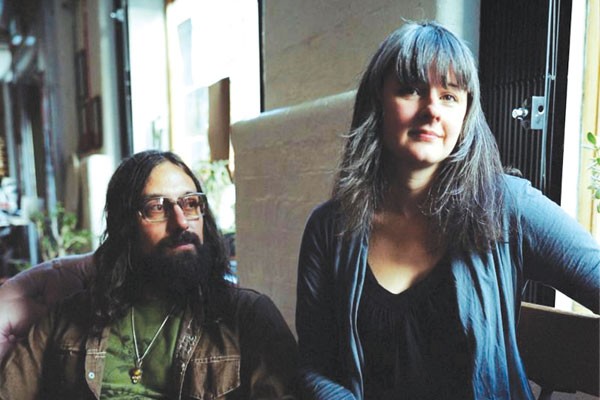 Wearers of many shirts: MV & EE

Within the sweaty confines of folk-and-blues rock and its crowded dirt-box of sound, MV & EE — Matt Valentine and Erika Elder — make crystalline sandcastles that stand the test of time. Since its inception in 2000, the duo has released a prodigious number of LPs, EPs, splits, live performances and even solo recordings.

While he is blessed with the vocal fragility of Neil Young and the bed-headed looks of John Lennon, Valentine embodies neither of those artists' hubris. His spacey outsider music rides instead on easygoing vibes and natural lyricism, as does his relationship with Elder, whose presence conveys the twin spirits of Sandy Denny and Janis Joplin.

Valentine and Elder experiment with both Western and Eastern musical traditions, tweaking pedals to electrify the acoustics as they slowly uncoil the songs. Working with various accompanying musicians and a multitude of indie labels (most notably Ecstatic Peace), they've melted rhythms into solos, songs into mantras, and minds into mush on over two dozen albums with names like Drone Trailer and Cosmic Dust & the Electrobeam Hermit Thrush.

2011's Country Stash (an LP released on Three Lobed) winds around like a snake in the grass before Valentine's fine-ground guitar meanders to find higher ground in "The Crash Palace of Records." Elder's voice lingers gently, hanging in the humid air of "Tea Devil," while her adulterated mandolin bubbles forth without ever boiling over. Soon, and with fluid transition, all things pass into a beautiful Indian raga that leaves musical ellipses in its wake.

Wandering troubadours that they are, Valentine and Elder search for the kindness of strangers, linking up with other like-minded music heads on tour to jam out, and often record, their notions. Imagine something like Chaucer's Canterbury Tales, but substitute any snuffbox for a "puff box," and you'll have begun to conjure their happy-go-lucky journey, one that gets higher with collaboration.

Encouraging audiences to capture these performances in multi-track "taper pits," Valentine and Elder embrace a fundamental folk concept that's been largely forsaken by today's proprietary rigueur morale. Sonically speaking, though, they are way beyond any sort of "time capsule" appeal; they wear shirts of all shapes and sizes, yet everything fits like it was custom-tailored.

No matter what direction they take, Valentine and Elder continue moving forward. Whether onstage or in a homemade studio, MV & EE reaches its secret destination by making music that travels on, leaving a loving footprint in the stardust.