Music therapists do a lot more than sing

“Any place a social worker might work, it may be possible to find a music therapist there." 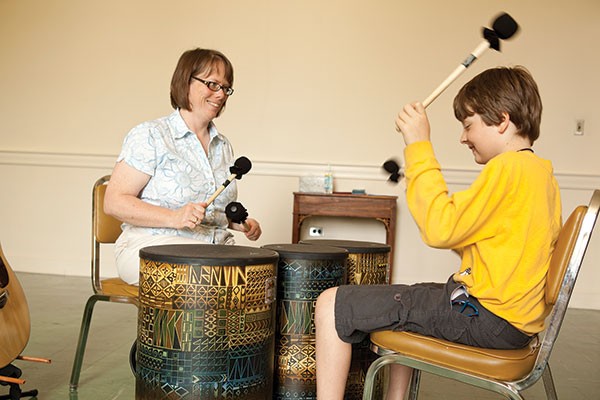 Michelle Montgomery Muth took the long way from her hometown of St. Paul, Minn., to Pittsburgh. The Center Township resident went to college in Boston and got a degree in piano — then took several marketing jobs in Boston and Seattle, while performing on the side. But it was only after moving to Pittsburgh that she settled into what she'd come to find was her calling: music therapy.

“What I really loved was music, and working with children. So I went back to school at Slippery Rock," one of three nearby universities that offer programs in music therapy. (Seton Hill, in Greensburg, and Duquesne University are the other two.) “Sometimes it takes us a while to find what our place is, but I found my place."

Music therapy has existed formally as a discipline since the 1940s, though its antecedents stretch back to the early 1900s. It can be used in a number of different clinical situations: with children with autism-spectrum diagnoses, older people with Alzheimer's, those in correctional facilities, and those with chronic pain, among others. The goals are as varied as the clients, but the common thread is that music is used as the main therapeutic tool.

Muth works largely with children, many on the autism spectrum; the difference between her role as a music therapist and that of a music educator is that her goal in having a child play music isn't just to teach the child a scale.

“Take a song, like ‘Row, Row, Row Your Boat,'" Muth says. “They learn that song; it has a beginning, middle and end. It has a specific duration in time. They know what's going to happen. Then I decide to change the words one day. That's bringing change into their life, but within a context they're used to. The goal is that that will go smoothly. It's a simple way of introducing change."

Music therapy can involve making music — either improvising or playing already-written songs — or listening. It might be used with Alzheimer's patients by playing music the client would have listened to as a child, to help activate brain activity. For those with chronic pain, music therapy can be used to help alleviate pain by providing something else to concentrate on. Last year, former U.S. Rep. Gabrielle Giffords credited music therapy for the speed with which she recovered her speech after being shot.

Some music therapists, like Muth, work independently with clients — she runs her own business, called M3 Music Therapy, and often travels to clients' homes. Others work in educational, correctional or hospital settings.

“Any place a social worker might work, it may be possible to find a music therapist there," says Dr. Elaine Abbott, chair of the music therapy department at Duquesne University. “But there are only about 6,000 board-certified music therapists in the nation."

Music-therapy programs in colleges are for the most part housed in music schools; music therapists generally are musicians by training before they pursue therapy. (Abbott, like Muth, played piano and is trained as a vocalist — though both also use other instruments in their work.) There are 72 undergraduate music-therapy programs in the country — western Pennsylvania, therefore, is somewhat overrepresented in terms of music-therapy education, if not practice. The Music Therapy Certification Board lists 45 certified music therapists in Allegheny County, and a number more in surrounding counties.

“The ... programs like Duquesne and other close by make it an above-average [rate] for a city of its size," says Al Bumanis, director of communication for the American Music Therapy Association. "[Pennsylvania] is always in the top four in the U.S. in numbers of members and therapists."

But that doesn't necessarily mean it's easy to be a music therapist in Pittsburgh. Both Muth and Abbott say perceptions of music therapy here aren't always accurate, or positive.

“There are different attitudes depending on where you are located geographically," says Abbott. “And I honestly can't speak to what motivates those different attitudes. I know that there are a lot more jobs in the Philadelphia-New York-Boston corridor than in the Pittsburgh area."

And misconceptions about music therapy abound anywhere. The biggest that Muth often hears: “Thinking it's just doing music. ‘You're just singing to them, entertaining them.' I go somewhere to present now and I'll ask people, ‘How many of you have heard of music therapy?' and three-quarters of the room usually raise their hands. Then I'll ask, ‘How many of you really feel like you know what it is?' And usually no one raises their hand. But that's fine; 10 years ago, they would have said, ‘What therapy?'"

Musical talent is one prerequisite for becoming a music therapist; the personal touch that's common to social workers and the like is another.

“Being open to, if not already possessing a wide taste in music," is important, says Muth. “You could end up working with people in their 80s and 90s, so you have to know what was going on in their childhood. Having compassion [is another essential quality]. It's a combination of a creative musician and someone who's going into health care. The scientific and creative being blended together."

And another thing — music therapists have to be ready to deal with that "What therapy?" question.

“Since I've worked with start-up companies in marketing," says Muth, “I was always educating people — and that's part of music therapy, too. I think a lot of students go into music therapy and are thrown by how much you have to explain what it is. But to me, that's just what you do."