Music isn't the only lesson students learn at rock camp

"We're really trying to instill core life skills with music as a vehicle." 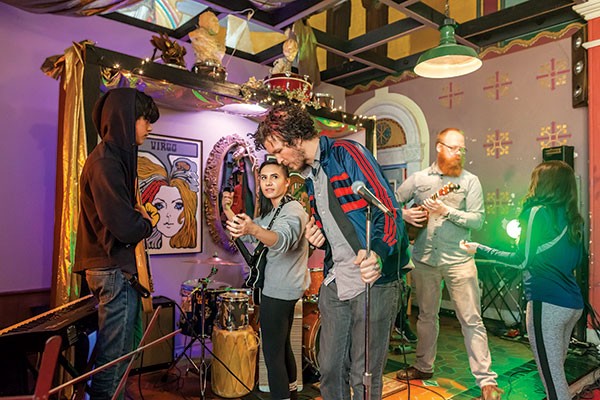 What's on Your MP3 Player?

What's on our MP3 players: A look at what CP staffers listen to

Onstage at the New Bohemian — a church-turned-venue/tattoo shop in the North Side — a band called the Funktion launches into a familiar cover.

"There is a house in New Orleans / they caaallllll the rising sun."

There are two lead singers, of notably differing heights: The taller one is dressed in black sequins and pink Doc Martins, while the smaller one looks a little like she stepped out of a Jane Fonda workout tape. Both have their hair in side ponies. As they trade off verses, the lead guitarist mugs at the audience from the background, and the floppy-haired drummer keeps the beat with stone-faced concentration. Holding it all together is a bespectacled keyboardist/singer/guitarist, who seems to still be growing into his bulky white tennis shoes.

It's a pretty solid rendition, especially considering its being played by a group of slightly wound-up, slightly nervous 8- and 9-year-olds.

This is the dress rehearsal for Rock School Pittsburgh's end-of-semester concert, a chance for the program's participants, the oldest of whom are in their late teens, to show off the songs they've spent the past eight weeks learning. This semester's show — set for Jergels, in Warrendale, on April 26 — is entitled "1984," which means that most of the songs were either popular that year ("99 Red Balloons"), or have some loose theme of dystopian paranoia ("Every Breath You Take"). Some songs, like "House of the Rising Sun," don't really fit the theme at all: They're just fun to play.

Rock School Pittsburgh has been around for about seven years, but founder Eric Brockschmidt has been uniting young musicians in kids' rock since 2004. Working as a guitar teacher at a music store in Wexford, he recalls, "We were like, ‘Hey, all these kids are taking lessons — we should put them together in a band.'" That year, the kids held their final performance on the front porch of the store. "It was really loose and really wild." The store closed not long after, but Brockschimdt, along with a handful of instructors, continued the program.

Though Rock School Pittsburgh emerged organically, the concept isn't a new one. Paul Green started the Paul Green School of Rock Music, in Philadelphia, in the late '90s; it later became the country's best-known rock-camp franchise, The School of Rock. (It was also the inspiration for Richard Linklater's 2003 film comedy School of Rock, and the subject of the 2005 documentary, Rock School.)

Many similar programs exist both locally and nationally. And while the particulars of each program vary, the concept is generally the same: Get a bunch of kids together, divvy them into bands and, with the support of their teachers, let them embrace their inner rock stars.

Some students show up to Rock School with a few music lessons under their belt, but others have no experience at all. Many students return semester after semester. Fifteen-year-old Blair Nelson, who performs at the rehearsal in spandex pants and bare feet, has been in the program for three years. As the dynamic lead singer for a group of 14- to 17-year-olds — "We don't have a name yet, but that's OK!" she tells the audience — she nails ambitious crowd-pleasers like Van Halen's "Panama" and Queen's "Don't Stop Me Now."

"I never knew how fun it could be to be in a band," she gushes later, noting the transformative effect of playing for an audience. "You've got these people who [you see at school] and they're really quiet, and then they get up in front of people ... it's great to see. It's a great experience all around."

The process can be a challenge, of course. Brockschmidt compares it to trying to build something with a bag of mismatched Legos. 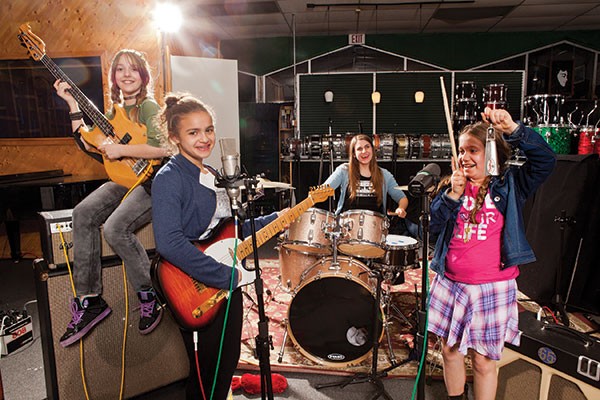 Where Rock School instructors help students assemble a set of covers, Real.Life.Music Camp — which has been around for 12 years and begins on Aug. 10 — focuses on original songwriting, and learning what it takes to have a career in the music business. Campers record in Mr. Small's professional studio, do photo shoots and put together press kits.

"The majority of students are kids who are serious about it and want to actually form bands or [become] professional musicians," says founder Liz Berlin, who has had plenty of experience in the music world as a member of the band Rusted Root. "Maybe they discover throughout the camp that they actually want to be a tour manager, or a booking agent at a club.

"We try to open up their world in terms of what career tracks are out there, and what is actually necessary to go in those directions."

During the winter, Creative.Life.Support also holds the We Rock Workshop, an intensive 18-week, Allegheny County-funded program for kids who are part of the foster system. Like Real.Life.Music, We Rock centers on creating original music, and ends with a performance. The current group performs its final show on May 8 at Mr. Small's Theatre.

"It really boosts their confidence," Berlin says of the participants. "They come in not knowing what to do, and they learn how to collaborate and learn how to express themselves. The lyrics that come out sometimes are really stunning.

"I think having a platform to express that and having techniques for expressing those things, and then actually getting to record and perform live ... it kind of opens up their world a little bit."