The season brings LaToya Ruby Frazier’s first hometown show; a 40th-anniversary exhibit at the Mattress Factory; and underwear to the Frick

Entering the fall season, Pittsburgh’s visual-arts community finds itself poised to answer a rather unexpected question: How to move forward from what at least one observer has designated “the most important art show in America,” the Carnegie Museum of Art’s 20/20, a collaboration with the Studio Museum in Harlem?

It’s a hard act to follow, but we’re holding our ground. The CMOA next turns focus to Ian Cheng with the internationally known artist’s installation Emissary Sunsets the Self, an enormous digital simulation, beginning Sept. 22. And nearby, Carnegie Mellon University’s Miller Gallery partners with the Hunt Institute for Botanical Documentation for World Within (Sept. 22), a two-venue exhibit exploring the partnership between art and science.

Looking Downtown, for the past several months, both floors of Wood Street Galleries have been owned by two diligent robots hard at work transcribing bibles and planets; their work is finally done as the Dutch art collective MACULAR brings four light installations. Wood Street’s is one of several shows opening during the Pittsburgh Cultural Trust’s Sept. 22 Gallery Crawl. Opening that night at the Trust’s 707 Penn and 709 Penn galleries is Clickbait: The App Expo, in which Ashley Adnrykovitch and Ashley Andrews observe art through technology, technology through art, and all of the above with an uncertainty of where the boundaries lie. And a block away, on Oct. 13, SPACE gallery opens The Long Run, a group show examining “the surface of things.” 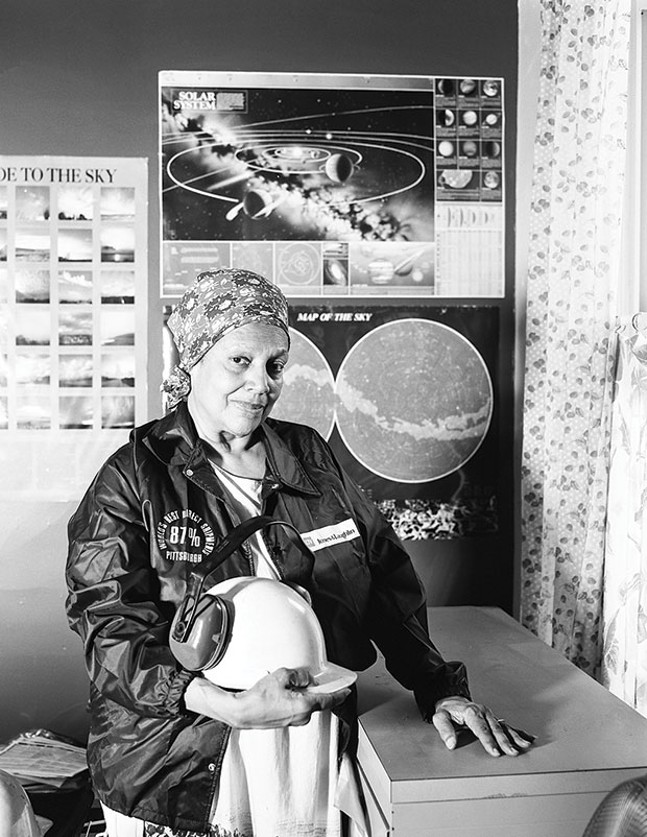 Art by LaToya Ruby Frazier
The Notion of Family and On the Making of Steel Genesis: Sandra Gould Ford, at Silver Eye Center and August Wilson Center, Sept. 22

Silver Eye Center For Photography plays home and away with MacArthur genius-grant winner and Braddock native LaToya Ruby Frazier, who receives her first hometown exhibitions. The Notion of Family (Sept. 21) turns a lens to the artist’s hometown of Braddock at Silver Eye’s own new digs, in Bloomfield; and at the August Wilson Center, Frazier and Sandra Gould Ford collaborate on On the Making Of Steel Genesis (Sept. 22), documenting the experience of black women and blue collars. Also at the August Wilson Center starting Sept. 22 is Went Looking for Beauty: Refashioning Self, photographs by Deborah Willis investigating the search for inner identity through outer beautification.

Pittsburgh Glass Center teams with 3 Rivers Glass Beadmakers for embodiment (Oct. 6), its first-ever show of jewelry and wearables. Adornments also hold sway at the Frick Art Museum, which takes the momentum of Killer Heels: The Art of the High-Heeled Shoe and moves up the body with Undressed: A History of Fashion in Underwear (Oct. 21), ranging from lacing it up tight to letting it all hang. And artist and educator Jo-Anne Bates gets her Pittsburgh Center for the Arts Artist of the Year show (prints and multi-media) on Nov. 17.

While museums and established spaces have the advantage of a set schedule with publishable events, there are plenty of area spaces hosting art shows and events that appear in the blink of an eye and disappear as quickly, from coffeehouses to storefront galleries. They’re worth keeping an eye on. There’s no question that we’ll be cited again for the work we bring into view. We just can’t predict where.