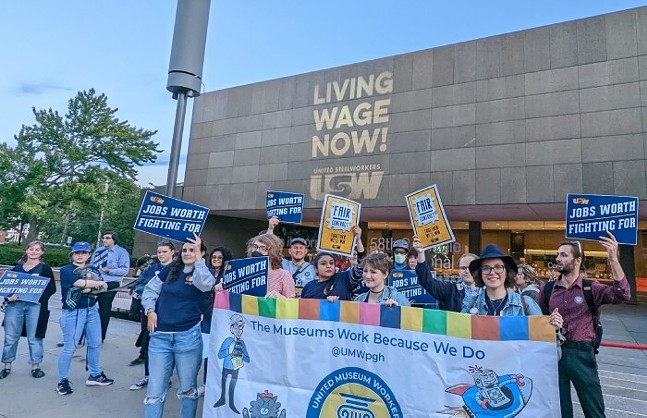 Provided by Guillermo Perez
USW demonstrators call for higher wages outside the opening gala of the 58th Carnegie International exhibit.

As artists and patrons gathered in Oakland for the opening gala of the 58th Carnegie International art exhibit, about 60 union workers stood outside demanding a minimum wage in their next round of contracts.

“The museums work because we do,” says Jenise Brown, co-chair of the union bargaining committee and a museum educator in a press release. “As workers we provide value to the museums and we’re passionate about our work. We love the museums, but we also need to pay the rent. We deserve a living wage for what we do."

The organizers are members of the United Museum Workers bargaining unit, which is represented by United Steel Workers and consists of about 500 employees across four Carnegie Museums — Art, Natural History, the Warhol, and the Science Center.

Abby Michalowski, bargaining committee co-chair, part-time educator, and gallery attendant who has worked at Carnegie Museums for about five years, tells Pittsburgh City Paper wages have improved since they unionized in December 2020, but “it does seem to be management’s prerogative to give as little as they possibly can while still technically giving us something.”

Natalie McClaine, a gallery attendant who has worked at the Warhol since February 2020 says the Carnegie Museums’ wages are low compared to those at similar institutions.

“Major museums in Cleveland, almost all of them pay a starting wage of $15 [per hour]. In Philadelphia, it’s $15 and they’re fighting for more there,” she says.

Another employee, Cody Pestana, tells City Paper when they joined the museum in 2019, they were told by senior staff they would have better promotional prospects if they quit and reapplied for an open position as a non-employee.

Part of the problem, Michalowski says, is the low status accorded to part-time workers at Carnegie Museums. 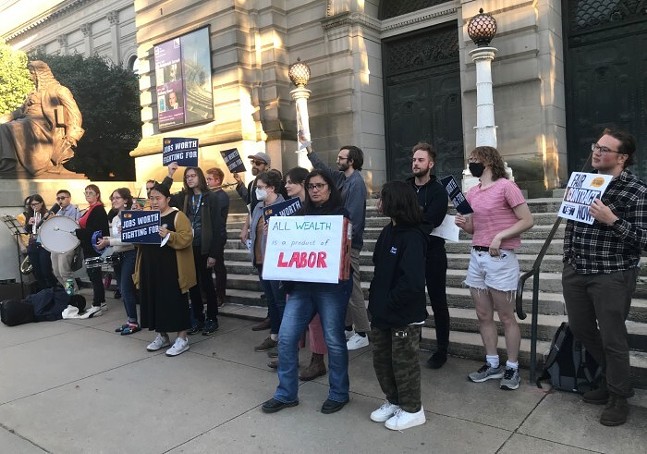 “I don't think that management respects part-time positions,” she says. “We have people that have master's degrees working part-time, and we have people that are artists that have shown around the nation that are working part-time. If you have ‘part-time’ attached to your name management tends to go ‘Oh, well, they just don't have the qualifications. They're just not qualified. They're a part-time person.'”

Michalowski says part-time workers are responsible for patrons’ positive experiences at the museum.

“Basically, anytime someone's come to the museum and had a good interaction with any staff member, that staff member was probably part-time,” she says. “And then anytime they've seen an exhibit that they really liked, that was put on by us.”

In an emailed statement to City Paper, museum management says negotiations are going well so far.

“Carnegie Museums of Pittsburgh is currently having productive discussions with the United Steelworkers, and we look forward to continuing those discussions as we negotiate a mutually beneficial collective bargaining agreement, which will be our first with the union.”