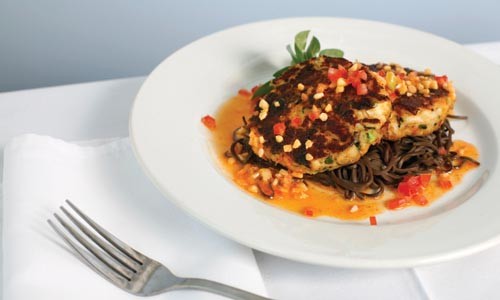 Crab cakes, steak and ravioli are the trinity of Pittsburgh dining, holy and inviolate. Not that there's anything wrong with that, or with any one of those dishes. Done well (and we don't necessarily mean well-done), each is its own version of ambrosia. It's just that, when we walk into a restaurant and see The Trinity on its menu, we start to get that formulaic feeling.

So it was when we walked into Muriel's, and all the more so because of the promise of "eclectic dining" on Western Avenue in the heart of historic Allegheny West. Even more so because crab cakes, steak and ravioli comprise nearly half of the menu's seven entrées.

What could we do? We ordered them, and realized anew why these dishes are local classics.

But we're getting ahead of ourselves. Before we perused the menu, we gazed upon the portrait of the restaurant's namesake: Muriel Black, a woman who passed on her love of life -- all 101 years of it -- to her grandchildren. One of them, Stephen Esherick, opened the restaurant with the inheritance she left him. Then there was a table on the pretty, secluded brick patio, whose signature flower is the Gloriosa Daisy, Muriel's favorite.

But the true tribute to Muriel was the food. While not self-consciously riffing on traditional Pittsburgh gastronomy the way that some newcomers do (haute pierogies, anyone?), the kitchen at Muriel's -- consisting of two chefs and an experienced adviser -- has refined its preparations in keeping with contemporary trends, especially southwestern American and Asian flavors. So the crab cakes incorporate sake, the steak is a newfangled flatiron cut, and the ravioli are wild mushroom.

Similarly, the simple twist of barbecued pulled pork made the nachos a signature dish. The slow-cooked meat was tender and dressed with a delicately spicy, agreeably sweet sauce. A substantial blanket of melty pepper-Jack cheese and stewed tomatoes rounded out the toppings. The same preparation is available on a Kaiser roll at lunchtime.

Rosalita potatoes, another appetizer, were actually fluffy, pillowy croquettes. Whipped taters, light and creamy, gained extra flavor from bits of scallion and bacon mixed in, not to mention the crispy batter in which they were deep-fried to a rich amber-brown.

For her entrée, Angelique succumbed to her sometime-weakness for crab cakes. Succulent jumbo lump was packed into two loose patties with scallion and herbs, then lightly grilled to crisp the outsides. Crab cakes are often only as good as their dressing; here, a sauce of sake, lime juice, cream and chili paste was mild yet distinctive. Angelique wished there had been enough of it to flavor the bed of otherwise-unadorned linguini, as well.

The steak was prepared simply, grilled and served with a red wine reduction, roasted potatoes and unexpected late-season asparagus. The flatiron cut is actually the product of university research, which identified this tender, flavorful portion of the chuck and figured out how to butcher it. For all that, Jason wasn't completely satisfied with his steak. It was well cooked and the sauce delicious, but the meat was sliced too thickly before serving, resulting in oversized, slightly chewy pieces. The potatoes looked beautiful, but lost their crustiness in the sauce beneath the steak; a less creative presentation would have given better-tasting results.

Still, by the time we finished our entrées, we realized that Muriel's falls into that category of restaurant where one orders dessert whether one has room for it or not. We were rewarded for our gluttony with lemon curd, a light pudding tasting of true sweet-sour citrus and served in a deep-fried confection reminiscent of a taco shell. Chocolate mousse was stiff, dense and rich enough to share without feeling deprived.

Muriel's is, after all, eclectic cuisine prepared by a thoughtful kitchen and delivered with gracious service. So come all ye faithful, and enjoy the Trinity anew.

(Editor's note: The corkage fee has been corrected from an earlier edition of this story.)