Murder for Two at CLO Cabaret 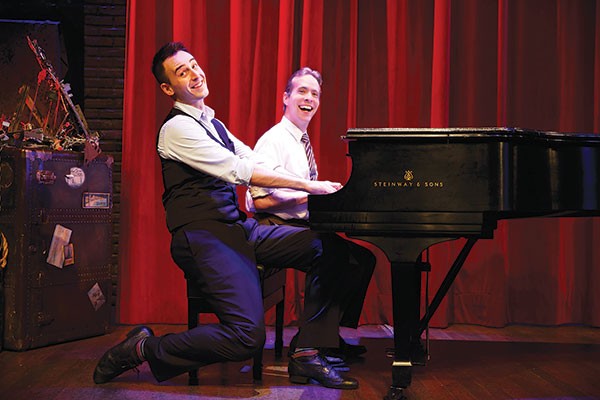 Photo courtesy of CLO Cabaret
They done it: Joe Kinosian (left) and Ian Lowe in CLO Cabaret's Murder for Two

The beginning couldn't have been more disheartening. At the start of Pittsburgh CLO Cabaret's local premiere of Murder for Two, two men come out and begin plowing their way through the exposition.

Joe Kinosian and Ian Lowe throw themselves into delivering the backstory, characters, plot and theatrical style of this two-character musical comedy about the murder of a famous novelist and the suspects involved.

Exposition is always the hardest part of any show. Nonetheless, my heart sank as Kinosian and Lowe waded through what seemed like a lot of necessary, if plodding, detail and, worse, a lot of unnecessary detail. Much of it was landing with a thud and most of the jokes were garnering, at best, a tepid response. Though performed in an intermission-free 90 minutes, the night was suddenly stretching out before us more like lukewarm taffy.

I'm not sure when, and really even how, it began to change. Slowly a connection developed between actor and material, and actor and audience. It became clear that this musical comedy (book by Kinosian and Kellen Blair) — which premiered in Chicago, in 2011 — wasn't a yuk-filled gag-fest, but a sly and wry character study.

Lowe plays Officer Marcus, there to solve the crime, and Kinosian is the handful of shady characters suspected of murder. And together they are the "orchestra": One plays the piano (music by Kinosian, lyrics by Blair) while the other sings, though sometimes they both play and sing at the same time.

The evening really takes off when you finally understand that Murder for Two, directed by Scott Schwartz, is actually a work in miniature: intensely crafted, but almost microscopic in detail. Big musical-comedy gestures and style are nowhere to be seen. Instead we have two enormously gifted actors fashioning exquisitely precise performances.

Lowe's police officer is the charming, solid center of the show, providing the steadfast foundation for Kinosian's perfectly pitched characterizations of the suspects. Once you enter fully into the world of Murder for Two, the evening becomes an enchanting, if not entrancing, example of the near limitless possibilities afford by two powerhouse performers and one piano.