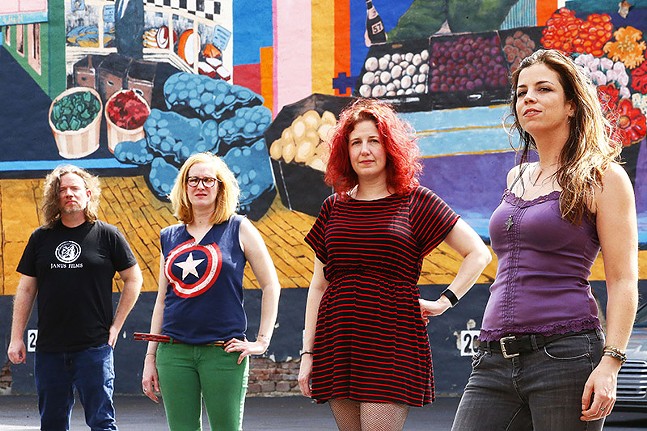 CP photo: Jared Wickerham
Murder For Girls: Jonathan Bagamery, Michele Dunlap, Tammy Wallace, and Stephanie Wallace pose for a portrait in the Strip District.
It’s been three weeks since Murder for Girls released its fun-as-hell music video for “(The World is Full of Helpful) Goth Girls,” and not a day has gone by that I haven’t been washed in a wave of nostalgia. It’s as if the Pittsburgh-area garage punk band just stepped out of Club Laga. The Electric Banana. The Decade.

Michele Dunlap is on the mic with lead vocals as she pounds away on her drums, wailing out the song’s tongue-in-cheek lyrics with a delightful screech. Bandmates Tammy Wallace and Stephanie Wallace, more typically seen in the forefront, provide killer melodic vocals and guitars, backed by Jonathan Bagamery’s driving bass line. It conjures up Baltimore’s Mary Prankster. California’s The Muffs. ’90s pop-punk teen sensations The Donnas, if they had been parented by Kim Gordon and Joey Ramone.

They’re a dream band for every Gen X’er sad about Bloomfield’s Howlers closing or finding out the Bloomfield Bridge Tavern has been turned into a weird ass apartment building. (Trust me, Google this if you haven’t seen it yet.) I have half of this story penned out in my head before the interview with the band even begins, talking about how stoked I am to have a Pittsburgh band so reminiscent of everything I miss about that era.

So imagine my dismay when halfway through interviewing the band, after asking if there are any comparisons people have made that have made their skin crawl, Stephanie says that the most annoying thing she hears is when people pigeonhole them as a ’90s band. “We just wrote these songs, and it's 2020,” she pouts.

But here’s the thing. They really do sound like they stepped out of another decade, but it’s not a bad thing. It’s fuckin‘ awesome. And with its newest album Done in the Dark, which just dropped online this past Friday, the band proves it’s still on the top of its game.

One way you can tell it’s definitely not the ’90s anymore is that I’m talking to the band on a Zoom interview at 11 a.m. on a Saturday morning. The four members of the band are all logged in separately from their homes across the greater Pittsburgh region, having not seen each other in person since March. (They’ll meet in person for the first time later in the afternoon for a socially-distant portrait for the image accompanying this story, which Stephanie says might bring her to tears because she misses her bandmates.) Michele oversleeps for the interview and logs in a few minutes late after Tammy calls to remind her about the call. (“Typical rockstar!” I think to myself.)

All four members did grow up in the ‘90s, though, so they can’t help but acknowledge some comparisons to the era. The women joke that Jonathan is their "token female rock bassist," like stereotypical female bassists in so many male-dominated bands in alt rock’s heyday.

One of the best compliments Stephanie said she’s gotten (while admitting later that it might be a bit backhanded) is “even though we're mostly female in the band, we’re not the stereotypically high maintenance type of females. We’re just fun, laid back, rock ’n’ roll chicks.”

Rock ’n’ roll chicks who took over Jonathan’s band, they joke. (Don’t worry, he laughs along.) The bassist is the one who first started the band back in 2013, placing an ad on Craigslist and eventually bringing on the current members. It was Jonathan who named the band too, and almost every Murder for Girls song starts with his bass lines, which he records then sends to the women in the band for them to add on guitar and lyrics.

“I guess I don't want to hurt people's feelings when I say this, but just in general, I enjoy collaborating with women in the workplace and creatively,” he says.

After Done in the Dark’s release show, originally planned for May 9 at Cattivo, was canceled, the band decided to do an online release instead. In some ways, the band says, it was easier because “everyone’s online” right now because of the pandemic. But they say they’re definitely missing the face-to-face interaction with the crowd.
click to enlarge 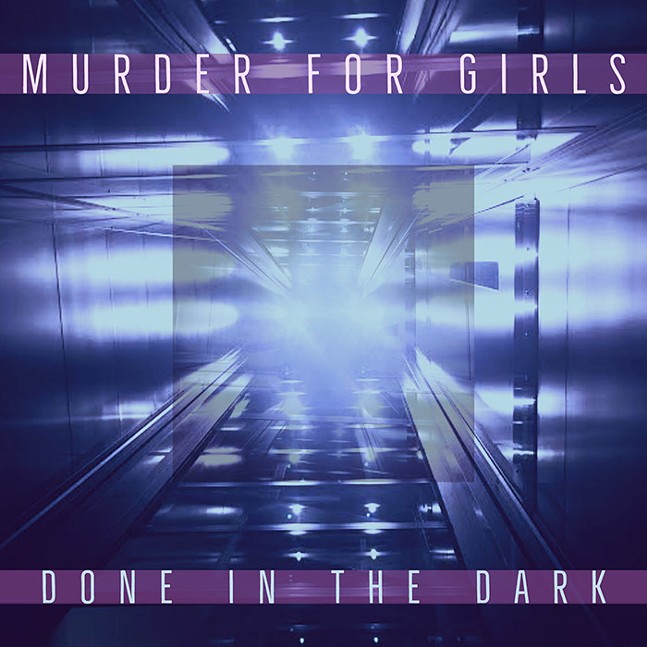 The members talk about venues they want to play when they’re able to play live again: Mr. Smalls, the renovated Thunderbird, “I just want to go to good old Gooski's,” adds Michele.

And the new album, Done in the Dark, the band’s third full-length release, is made to be performed live. It’s packed full of nine rocking songs produced, recorded, and mixed by Tommy Stinson of Replacements and Bash & Pop notoriety. (The band opened for the latter at Mr. Smalls in 2017 and Tammy says he’s been a friend for years.)

The album was recorded in a few short days in New York. Stinson had them play the songs repeatedly just a few times. “He doesn't really believe in, you know, beating a song to death like playing it 20 times trying to get it right,” says Tammy. The result is an album that’s a bit cleaner and more polished than the band’s previous recordings, but Stephanie said she was able to talk him into getting at least some distortion back. “He called it the Lemmy pedal,” she says.

This comes through perhaps the best on the hard-hitting “Patchouli,” with equally savage lyrics: “I want to tell you, I see your ugly face, I want to smash it / I'll be laughing when you go to jail, I hope it's everlasting / I'll be laughing when you go to hell, I hope it's everlasting.” And there are so many other gems. The bass on “Run” kills. “Star” brings up vague hints of Hole’s “Doll Parts.” “Broken” is a surprising mix of grit and glitter.

And there’s that “Goth Girls” song, of course. And there really was a helpful goth girl that inspired it, too. Jonathan said awhile back, he posted a question to Facebook asking for advice on a good place to hang flyers to promote an upcoming show and a goth girl “emerged from the shadows” into his inbox.

“She had a spreadsheet with multiple tabs with different Pittsburgh neighborhoods and where you hang flyers and what time of day you go there and who you talk to,” he says. “After that, one of us said, ‘You know, the world is full of helpful goth girls because it truly is.’”