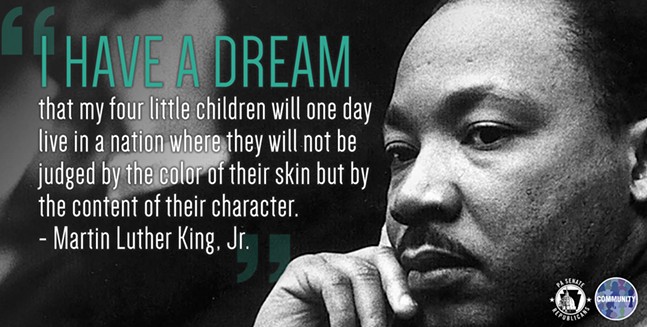 Image that several Pa. Republican state Senators used in tweets about Martin Luther King, Jr. Day
During the Civil Rights era, Martin Luther King, Jr. was not an overwhelmingly popular figure. It was only years later that Americans began to truly appreciate the power of his advocacy, and the importance of passing landmark civil and voting rights legislation he championed.

Since the creation of a holiday honoring King in 1983, it has become customary for both Democratic and Republican members to honor the holiday and King’s legacy. Many on social media have been quick to point out that Republicans tend to celebrate King, even as many GOP legislators don’t support current civil rights and racial justice movements.

And on Mon., Jan. 18, a group of Pennsylvania state Senators provided a telling example of just how little pronouncements about MLK can actually mean, as eight state senators within the Republican caucus appeared to have simply copy and pasted the same message in tweets about King.

Senate President Pro Tempore Jake Corman (R-Centre) tweeted at 7:30 a.m. on Jan. 18 that “Martin Luther King, Jr.’s peaceful activism continues to inspire Americans today. His dream of a nation where citizens ‘will not be judged by the color of their skin, but by the content of their character’ is within our reach.”


Martin Luther King, Jr.’s peaceful activism continues to inspire Americans today. His dream of a nation where citizens “will not be judged by the color of their skin, but by the content of their character” is within our reach. pic.twitter.com/H5EMGUUiTa

Some on social media were quick to point out Corman's role in supporting a Republican-led lawsuit that asked for certain mail-in ballots in Allegheny County to be discounted in the Pennsylvania state Senate District 45 election, not to mention that Corman was implicated in asking Congress to delay the certification of President-elect Joe Biden's victory in Pennsylvania. King famously advocated for expanding voting rights and his advocacy helped Congress create the landmark Voting Rights Act of 1965.

The language for Corman's tweet apparently first appeared from a tweet sent out by state Sen. Mario Scavello (R-Monroe) at 7 a.m. Seven additional senators, including Corman, tweeted out the exact same message throughout the morning of Jan. 18. That includes two Republicans from Southwestern Pennsylvania: state Sens. Camera Bartolotta (R-Monongahela) and Devlin Robinson (R-Bridgeville).

At around 7 a.m. on Facebook, Scavello also posted the same image and text on his Facebook page, but added the line, "The first modern private citizen to be honored with a federal holiday," to the beginning of the post. The PA Senate GOP Facebook page posted the same exact image and text at around 9 a.m. A handful of other Pa. Senate Republicans used that exact sentence in their MLK Day post as well.

State Sen. John Yudichak (I-Luzerne) is the only non-Republican to tweet out the message. However, Yudichak caucuses with the Republicans after leaving the Democratic Party in 2019, partially because he felt a lack of support in trying to prevent the closing of a state prison within his district.


When you have the day off and still couldn't be bothered to draft a unique message... pic.twitter.com/sRZl5Ag1ZN

State Rep. Summer Lee (D- Swissvale) called out a group of the senators for failing to craft an authentic and original post about King.

A request for comment to the PA Senate GOP went unanswered as of press time.