“One of the things I love about Pittsburgh is that it’s a place where you can create something from concept to fruition.”

THE GARMENT DISTRICT with SAGAS, HERBCRAFT 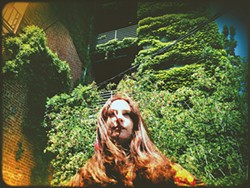 As the lead force in The Garment District, Jennifer Baron takes inspiration from artists and genres ranging from My Bloody Valentine to 1960s British psychedelia, creating her own swirling sonic stylings. On Sept. 4, at Howlers in Bloomfield, she’ll release Luminous Toxin, a dreamily cinematic, multi-instrumental pop album.

Baron composed and performed the entire record herself, but she doesn’t aim to present her work alone. The release show will utilizes a blend of local talent, an evening with a uniquely charming, collaborative Pittsburgh vibe.

“One of the things I love about Pittsburgh is that it’s a place where you can create something from concept to fruition,” says Baron, who — prior to starting The Garment District — was the founding bassist of Brooklyn-based indie-pop band The Ladybug Transistor. “It’s a place where it’s manageable to be a maker and be part of the creative process.” For Baron, Pittsburgh and its topography provide a significant amount of inspiration for her work: “It’s a very textured place, architecturally and visually. Here, the seasonal changes are dramatic,” she says. “I’m very impacted by all of that and [that is reflected] on this album.”

The live-band configuration of The Garment District has shifted since Baron founded the project several years ago. But on Friday, the lineup will include Ashlee Green, of Butterbirds, on vocals, and Dan Koshute, of Dazzletine, on guitar. Other members are Greg Langel (Baron’s husband and long-time collaborator) on keys and Shivika Asthana (of Boston’s Papas Fritas) on drums and backing vocals.

But Baron is firm that Luminous Toxin is a personal work, written in what she describes as a “cocoon” last winter. “I was home by myself a lot, and was watching a lot of old shows like Rod Serling’s Night Gallery,” she laughs. “It was like this other world.” From there, her music emerged and is now ready to fly: “I always hear melodies and layers and textures, and I like to integrate that with a free-form approach,” she adds. “Luminous Toxin has come together like a coherent collection of compositions that is able to span a range of times.”