For a couple of years, a spacious storefront on the downhill slope of Murray Avenue was home to a bakery café that featured earth-toned walls, wood floors the color of golden-brown bread, and comfy, overstuffed armchairs for lounging. Now, with the bakery closed, the space has transitioned effortlessly into a barbecue place -- the first we've ever been to with a cozy café feel.

Somewhat surprisingly, it works. The owners of Mr. Willie's BBQ have strewn the coffee tables with books on barbecue, grilling and cooking, providing reading material for those waiting for takeout. In a back corner, a few arcade games create further diversion and invite hanging out. Alongside the casual café seating are even a few traditional dining tables for eat-in, but there's no real table service, and place settings are paper and plastic.

The menu is straightforward, while daily specials, such as grilled knockwurst, venture beyond the same old barbecue clichés. The former bakery case now holds steam trays filled with traditional soul-food sides: macaroni and cheese, red beans and rice, collard greens, and so on. While there is a kitchen in the back, some of the cooking elements are out behind the counter. Waffles, for instance, are cooked to order before your eyes, and ribs get a quick reheat on a griddle before being slathered with sauce.

Chicken and waffles are a classic Southern combination, and Willie's does them respectably well. Our fried chicken was crispy, with a dark, flavorful crust. Despite their freshness, our waffles were soft and pale, a bit underdone. A little longer on the iron, and we would have enjoyed even more their distinctive buttermilky flavor.

It must be said that, for all her years of living in the South, Angelique never developed much of a taste for barbecue. So she ordered a grilled Cajun rib-eye sandwich, which the menu described as including sautéed onions, peppers and mushrooms. Instead of this savory mix, she was served a slab of steak unceremoniously plonked between the halves of a kaiser roll. The meat was dry, but rubbed with a palatable blend of Cajun spices. We can't help thinking we might have gotten a different sandwich at an earlier hour. Without meaning to, we had arrived near closing time, and that certainly could have explained the dried-out steak and lack of accompaniments. Still, we would have appreciated a word to the wise about the availability of what we ordered.

Jason fared no better with his pulled-pork sandwich. The meat was in chunks, not shreds, and lacked the melt-in-your-mouth tenderness we expect from this barbecue staple. Furthermore, the vinegary sauce was dissatisfying, unsuccessfully straddling the tartness of North Carolina barbecue and the sweeter sauces more common around here. Jason has rarely been so let down by pulled pork, and unlike with the Cajun rib-eye, he couldn't chalk its flaws up to timing.

We ordered several sides and found some better than others. The macaroni and cheese was thick and hearty, with a toothsome texture and some sharp flavors making clear that real cheese -- not just a processed mix -- had been involved. Cajun rice with red beans was good too: We appreciated that they were Cajun not in name only, but in their assertive spicy flavor. The big shreds of ham in the greens -- a mix of collards and kale -- looked promising, but the only flavor in this dish was brine. Garlic-roasted potatoes were moist, well-seasoned and a nice contemporary update to the soul-food tradition, but our portion contained a few undercooked chunks that spoiled the dish.

At the end of it all, a barbecue place lives and dies by its ribs. Were Willie's good enough to make us forget our other disappointments? The meat fell off the bone, just like it should, while retaining some meaty chew, which is easier said than done. The sauce was thick and sweet without being cloying, with good peppery notes. These ribs would have been a suitable centerpiece for a mouth-watering spread of Southern cooking. But good as they were, Willie's ribs failed to transcend the over-seasoned, undercooked dishes around them.

Barbecue in the heart of Squirrel Hill is a new concept, and a sound one, based on the crowd we saw at Mr. Willie's on a Friday evening. But until the grill resolves a number of shortcomings, we'll stick to the ribs. 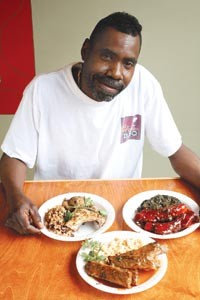