Mr. Small’s ups the ante with TV on the Radio and Black Rebel Motorcycle Club

This convergence of major-label indie rockers — truly an oxymoron for our times — is doubtless just a quirk of touring schedules. But it will make for an intense weekend of back-to-back rock at Mr. Small’s: eccentric art-punks TV on the Radio with Dios on Fri., Aug. 3, and moody garage rockers Black Rebel Motorcycle Club with Jesse Malin on Sat., Aug. 4. Sleeping in your car in Millvale between shows? Optional.

Tickets at the door probably aren’t optional for these shows, though especially when you consider that TV on the Radio’s Return to Cookie Mountain was one of 2006’s most critically fawned-over releases, landing Spin’s Album of the Year, among other year-end lists. And, yeah, “Wolf Like Me” and the Bowie cameo “Province” are pretty intense. Those songs and several others got a second airing this spring on the live EP, Live at Amoeba Music. If that document and live reviews are to be believed, expect less of the swirling, atmospheric layers of Cookie Mountain, and more straight-for-the-throat rock.

When Black Rebel Motorcycle Club played Small’s last year, the band was promoting Howl, which substituted stripped-down, rootsy hooks and stomping beats for the band’s usual wall of punky guitar. Although the record wasn’t the most exciting addition to BRMC’s catalogue, the band’s live show was one of the more memorable local performances of 2006: barely visible within dense clouds of colored smoke, Peter Hays and Robert Levon Been stood nearly motionless as the band played for — if my memory serves me right — over two hours.

This time, BRMC’s playing cuts from this year’s Baby 81, a return to form in more ways than one. First, with songs like “Weapon of Choice,” Baby 81 racks up the body count with a rebellious sneer and arena hooks atop the band’s Beatlesque melodies. Second, drummer Nick Jago has returned to the fold, giving the grooves a heavier, Secret Machines power.

After each of these shows — if you are over 21, and don’t mind waiting in line — you can head to Brillobox for free official afterparties. And if the party that followed Interpol’s July 24 show is any indication, you may get to rub shoulders with band members, if that’s your thing. 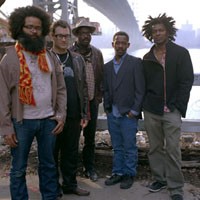 Were Wolves: TV on the Radio