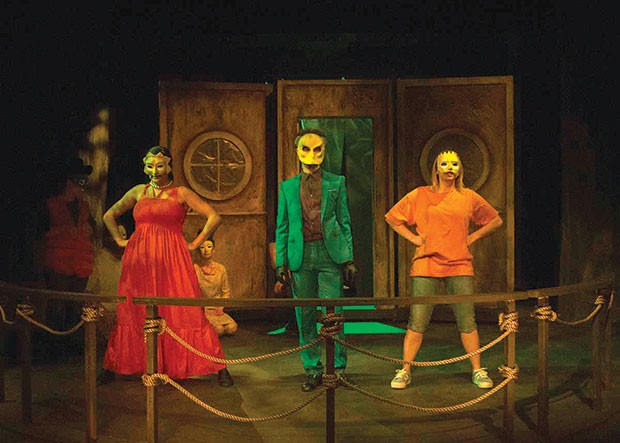 The world is devastated; civilization has collapsed, and the humans left alive wander from city to city in search of food, family, fuel and, hopefully, an end to their crushing sorrow. Their last connection to the old times, the one element bringing them together and, perhaps, ameliorating their loss, grief and aching need for connection is … The Simpsons????

That’s what playwright Anne Washburn would have you believe in her dark 2012 comedy Mr. Burns, a post-electric play, now getting its local premiere through 12 Peers Theater.

In the first act, an unnamed apocalyptic event has left the world without electricity, and a group of survivors bands together somewhere in New England. To fill the void, they pull from their combined memories the “Cape Feare” episode of The Simpsons, which spoofed the 1991 remake of the 1962 film Cape Fear.

The second act takes place seven years later, when this group is now making a living as troubadours performing that episode, along with commercials, for the populace. In the intervening years, the episode has changed, reflecting the nature of memory as well as how external forces can alter received perception.

Act III is set 75 years hence. The episode has now become myth, as we watch a group presenting “Cape Feare” as a morality play/religious pageant; it’s become a cautionary tale explaining how the world became what it’s become.

I’ll say one thing for her: Washburn’s got an enormous imagination, and this look at the evolution of storytelling is an intellectually intriguing one. In its way, Mr. Burns is a scathing indictment of faith and consumerism, something you don’t often see in the theater.

The 12 Peers production features a fully committed cast attacking the play with conviction and utter fearlessness. While I wish that director Vince Ventura had upped the dramatic stakes considerably (especially during a listless first act, where the characters aren’t just sitting around a campfire telling stories but, really, sitting shiva), the company plows through the following two acts of what is, ultimately, an unworkable play.

Alfred Hitchcock used to gleefully mock people he called “The Improbables” … those who let plot holes and gaps of logic distract them from the movie. Being an Improbable at Mr. Burns is impossible, since the plot is nonsense. In 82 years, no one has learned to generate electricity? (Did the rivers stop flowing?) And if there is electricity, can no one work a DVD player? And if so, hasn’t anyone thought to watch a Simpsons disc? I also didn’t understand why rival performance troupes would be fighting for pieced-together television scripts with 500 years of complete playscripts laying around. In an apocalyptic landscape, I predict a Neil Simon revival.

If Washburn had trimmed an hour from this two-and-a-half hour play, we might not have had time to ask these questions, and Mr. Burns could be a far more successful entertainment.