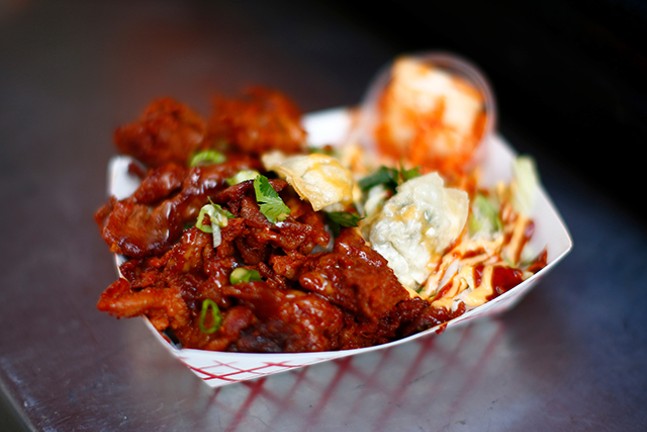 A short menu is usually a good sign when it comes to food trucks — it allows the chefs to deliver consistent flavors and focus on what they do best.  Mr. Bulgogi is no exception. The Pittsburgh food truck keeps the menu brief and frequently rotates dishes in and out. The only constant is its eponymous dish, bulgogi.

Bulgogi (pronounced buhl-go-ghi) translates to “fire meat.” The dish’s origin dates back to 37 B.C., evolving with Korea's invasion and independence until the 20th century when it was popularized neobiani, “thinly spread meat.” Mr. Bulgogi's history doesn't go back that far.

The food truck hit Pittsburgh streets in 2017 and quickly drew a strong fan base (and the 2018 TacoMania Championship).

I tracked the truck down on a Saturday afternoon parked outside of Biddle’s Escape in Regent Square. On the day I visited, the menu consisted of three rice bowls, dumplings, and kimchi.

I started with the bulgogi rice bowl. The beef was piled on top of rice with cilantro, lettuce, and streaked by two sauces. The first, and perhaps most important, part of bulgogi is the meat, sliced razor-thin — so slim that the slices are almost translucent. It’s marinated in a concoction of soy sauce, apple (or Asian pear), onion, garlic, scallion, and brown sugar, the ratios varying based on the chef.  No two marinades are the same.

Because it’s sliced paper-thin, the meat absorbs flavor quickly, so after a short time the meat is char-grilled on a barbecue or in flames. The result is a tender, earthy meat, served with rice, kimchi, or wrapped in lettuce.

My spiced pork bowl was marinated in a Korean pepper paste, gochujang. It was every bit as tender as the beef, decorated by the same zig-zags of sauce, lettuce, and cilantro as the bulgogi, but finished by a sprinkle of green onions. Dark char marks on the meat balance the thick, sweet marinade. Heat was not lost in sweetness; the gochujang spice came through loud and clear.

The truck’s final offering was fried dumplings. These miniature, crimped pockets of chicken and vegetables were crispy, bubbly, and so delicious I don’t think I took a single breath before they were gone.

There were no duds on Mr. Bulgogi's menu on the day I visited and I'm confident I'd love pretty much anything the chef felt like putting on the menu. The day-to-day items might change, but the dynamic flavors — and the bulgogi — aren't going anywhere.

The best part about any food truck, in my opinion, is the surprise of finding one in your neighborhood. If you prefer to plan out your meals, keep an eye on the truck’s Facebook page. Every week, it updates its schedule.

Mr. Bulgogi’s menu is constantly changing. Make sure to order one of everything — you never know when it’ll be back.

Typically, fried tofu is soggy or over-oiled. Not at Mr. Bulgogi. The tofu was sliced thin and actually held flavor.