Moving the Line: Munchak's experience could bring O-line to next level

"The more consistent they are with technique, the more successful and consistent we'll be." 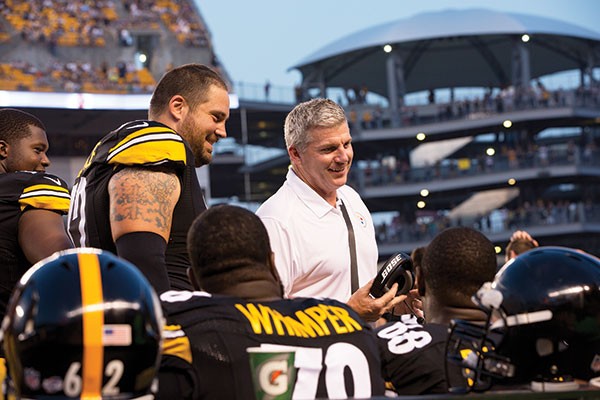 Mike Munchak's approach to coaching can best be described as holistic.

Which is not to say the former Tennessee Titans head coach — and new Steelers offensive-line coach — uses crystals and herbal concoctions or invokes spirit animals. It's that he believes his players must understand the totality of each play call, and his overall offensive philosophy.

Fans may wax nostalgic about the old smash-mouth days, but for the players, it's not as simple as lining up and hitting the guy in front of you. Inside and outside zones are the thing. Players move, pull from one side to the other to block different zones. Assignments change depending on the defense or an audible call.

"That's a process. It's a progression of teaching."

There's a lot to understand. Some might even say that an inadequate understanding of blocking schemes led to center Maurkice Pouncey's knee injury on the eighth play of the 2013 season (when Munchak was still with Tennessee).

There are few NFL coaches who understand how to play on the offensive line better than Munchak. His 12 years on the front line of the Houston Oilers earned him nine Pro Bowl appearances and a spot in the Pro Football Hall of Fame. He then spent 14 seasons as the offensive-line coach of the Tennessee Titans before starting a short run as head coach in 2011.

Offensive-line play doesn't break down into easy-to-digest sabermetric bite-sized portions. But while good play is hard to quantify, sub-par play is easy to spot. You don't need to know that the Steelers ranked in the bottom half of the NFL in sacks allowed (43) — giving up one sack for every 13.6 attempts — to know that this unit has been a disappointment for some time, particularly the past two seasons. And in those two seasons, the Steelers' record was a textbook display of fair-to-middling performance, posting two 8-8 records and golfing while their division rivals, the Bengals and Ravens, appeared in the playoffs.

Some of the line's lackluster performance has been due to injury. Pouncey's injury in the first game of last season, along with David DeCastro's rookie-year preseason knee injury, have kept the line from excelling. Nearly every starting lineman has missed time due to injury: Ramon Foster is the only starter who has come close to playing two full seasons, starting in 31 of 32 games.

Short of waving a magic wand to prevent injury, how can Munchak get this unit to reach its potential? By going back to basics: Fundamental precision is the essence of Munchak's view of his job.

"I'm big on that. I think it helped me throughout my career," he says, downplaying his talent and Hall of Fame career. While other units can be caught occasionally standing around at practice, his players are a study in constant motion.

"The more consistent they are with technique, the more successful and consistent we'll be," Munchak says. "That will be all year long. We'll keep hammering away at it. That's my job: to figure out what their weaknesses are, and have drills to attack that. It's not just busy drills. If I can have a drill and put it on the tape, then they can see that and see that it's helping. So, as a coach, as a teacher, that's what I'm trying to do."

There was a time when offensive linemen toiled in obscurity. But even though Munchak says linemen prefer working outside the limelight, the heat is on the Steelers line to perform this year. The line is loaded with early-round draft picks: Pouncey and DeCastro were taken in the first round; Marcus Gilbert and Mike Adams (who will not start barring an injury to one of the starters ahead of him) were both taken in the second.

When there are that many blue-chippers, they will not be able to remain, as Munchak puts it, "outside of the dialogue." Attention will be paid. Because that's what being holistic is all about.