Friction with police was rising before global summit began 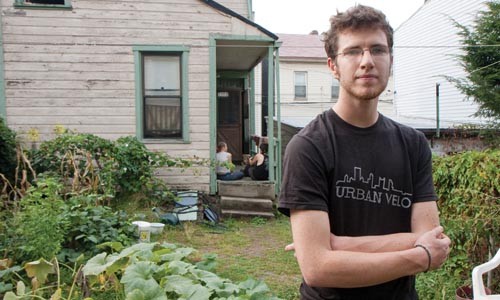 John Altdorfer
Dan McCloskey in the yard of his Lawrenceville home

For some Pittsburghers, it was a rude awakening to see film footage of police battling activists and students in Oakland during the G-20 summit. But for Dan McCloskey, the wake-up call came a few days earlier: at around 1:30 in the morning on Sept. 21.

McCloskey woke up that night to a chorus of slamming doors. When he peered out the window of his attic bedroom to scan Lawrenceville's Carnegie Street, the 22-year-old recalls, "Cop cars were stretched bumper to bumper the entire block. A flashlight hit my face, and a cop yelled, 'There's someone in the attic!'"

By the time he hustled downstairs, McCloskey says, one of his roommates was speaking with city police officers through the back door. The officers had already been searching through McCloskey's backyard garden, scanning his compost.

"You tell us," one officer answered.

Whatever it was, it was a scene being repeated in other homes as well. On several occasions prior to the G-20 summit, large contingents of police surrounded Pittsburgh homes and vehicles, apparently without warning or warrants.

McCloskey says there were roughly 10 officers at his front doorstep, with others waiting in their cars. "They had flashlights in my face and shotguns," he says, but "they had no warrant."

McCloskey shares the house with two others, all members of a writer's co-op which hosts readings in the house and publishes a quarterly magazine, Cyberpunk Apocalypse. Police asked for proof that he owned the home, and when he came back downstairs with the deed, McCloskey says the police excused their visit as a "mix-up."

"A neighbor probably said something," one officer told him before leaving. "You must have gotten on our list."

McCloskey didn't know anything about a list, and still didn't understand what prompted the late-night visit.

Like almost everyone else in Pittsburgh, McCloskey did know. And like many other Pittsburghers, he'd been planning to steer well clear of it -- until the police came. (If you stayed home, follow these links to see our coverage of the G-20's mishandling of environmental issues, its failure to address other global inequality, the reality behind all the
presummit hype, or the way the city punished activists who tried to play by its rules. Or just read about some of the 'only in Pittsburgh' occurences that happen when you bring a global summit to town.)

Much has been made of confrontations between police, protesters and college students on Sept. 24 and 25. But smaller-scale stand-offs had already taken place days before.

At almost the same time McCloskey's house was being surrounded by police, Krystyna Haberman says she and her friends were having a confrontation as well. Haberman says two friends, who were visiting from California and who were leaving Gooski's bar in Polish Hill, "got swarmed" by police on the way to her home.

She says the police asked her friends what they were doing in Pittsburgh. When her friends insisted they had no plans to protest the event, Haberman says, "The cops said, 'We don't believe you.'"

Haberman spent the G-20 itself in Cleveland, but this was her second run-in with G-20 security concerns. In July, WTAE-TV ran a report speculating that a minor trespassing charge brought against a Swedish rock band in Polish Hill might reflect the arrival of  G-20 protesters "who would like to cause damage to Pittsburgh." [See our story "Overreaction News," July 29.] Haberman had hosted a party for the band, but denies they were motivated by anything except curiosity about a vacant building nearby.

On Sept. 21, Haberman says, police asked to search her friend's vehicle, but her friends refused. "[The cops] were walking around my car and her van, trying to look inside." After about a half hour inspecting the vehicles, she says, the police left.

Not far away, Stephen Mesich says that numerous patrol cars visited his property the same night. "They were out in force," he says. "It was insane."

Mesich owns the former Irene Kaufmann Center on Brereton Street. For the G-20, Mesich was hosting a team of medics who planned to provide medical care for activists injured during the protests. Officers tried to force their way into the building by kicking a side door, Mesich says. His nephew confronted the officers at the door, asking, "What about a warrant?"

"We thought it was an abandoned house," an officer responded -- and by the time Mesich came to the door, he says, the officers were leaving. Mesich had another visit from the police -- this one on Sept. 24, after demonstrators in Lawrenceville had tussled with police -- but this one was much friendlier, he says.

Still, the initial visit "was just a show of force," he says. "They broke my door and screwed up my alarm system." But the real damage, he says, is that "For the first time in my life, I felt like I wasn't secure and that my personal freedom didn't matter."

"The entire [G-20] week has just been naked displays of force and attempts to intimidate, with little regard for people's constitutional rights," says Vic Walczak, who heads the local chapter of the American Civil Liberties Union. "It was just non-stop harassment."

Walczak says he hadn't been familiar with such tactics, having never dealt with a major event like the G-20. But he says that over the past week, other legal experts have told him such behavior is "classic" in such situations.

"Apparently, it's designed to intimidate and discourage demonstrators," says Walczak.

The actions taken by police are "very troubling," says University of Pittsburgh law professor David Harris. "The city was in an unusual situation" as a result of hosting the G-20, he acknowledges. But if armed officers appeared at people's homes without warrants, it "puts the burden on them to explain themselves."

In fact, the ACLU was in federal court the morning after police showed up at McCloskey's door. The group was suing on behalf of Seeds of Peace, a Montana-based group that operates a mobile kitchen for activists, and another group who claimed the city was harassing them.

Police tactics in the days prior to the G-20 became clearer during a Sept. 22 hearing before federal court Judge Gary L. Lancaster.

At the hearing, Pittsburgh Police Sgt. Jason Snyder testified that he was the head of one of many "G-20 Mobile Field Forces" charged with checking out leads provided by the city's intelligence office.

Snyder testified his team consisted of 10 city officers, 10 state troopers, two canine officers and an additional two to three officers to serve as an "arrest and booking force."

At the start of his shift, Snyder said, he received a list of addresses for his team to check out each night. The teams would then visit each address and simply "look for any illegal activity." During a single shift, Snyder testified, his team visited 10 to 15 addresses.

The ACLU had sought an injunction barring city police from stopping Seeds of Peace -- and from asking for identification without probable cause or a warrant. But Lancaster, citing the need for enhanced security during the G-20 summit, rejected the request. While lawsuits might be filed later on, Lancaster ruled, "I will not enjoin the city from enforcing these laws against anyone."

And the very next afternoon, Erin Carey says she was confronted by officers.

At about 3 p.m. that day, Carey says she was pulling into the parking lot of Lawrenceville's Ice House Artist Studios. Ice House serves as the home of Zany Umbrella Circus, a local circus group for which Carey performs as an aerialist. It's also located near a previous protest target: Carnegie Mellon University's National Robotics Engineering Center.

Before exiting her car, Carey says she heard sirens blaring down 43rd Street. Then, as she headed for the building, four police cars pulled up beside her. Four officers came out to talk to her (one of whom had a police dog with him), wanting to know what she was doing.

"I work here," Carey says she told them. But when police peeked into her car, she says, "They were alarmed by what they saw." Carey was transporting trapeze equipment, which she says police thought might be connected with protest activity. (In the days before the G-20, police were highly concerned about the use of PVC pipe, chains and other equipment, which protesters have used to chain themselves to demonstration sites. In fact, in one heavily covered incident, police mistakenly seized a length of PVC pipe from an alley near a robotics plant not far from the Ice House, fearing it would be used by demonstrators.)

"I'm like, 'I'm a circus performer!'" Carey remembers telling them. "'This is my equipment!'"

Still, police wanted access to the Ice House building, and Carey says she felt pressured to let them in. Two officers "poked around," but turned up nothing.

Before leaving, Carey says, the officers took digital photos of the contents of her car, and ran her license-plate number. "One officer said that if I showed up [at a protest], they would hunt me down," she recalls.

Police bureau spokesperson Diane Richard says such operations were to protect "the safety of the citizens of Pittsburgh." The police "deploy the amount of people that we think is necessary" on such operations, she adds. "I hope [people] wouldn't view it as overkill."

Did Richard think that such tactics might have scared protesters off?

If those protesters meant to violate the law, Richards says, "that would be a benefit. It's never our goal to have people not be able to exercise their First Amendment right. We just wanted people who come into our city to do it lawfully."