Motorpsychos haven't lost their edge after over a decade

"I like to be all about the makeup and the sexy clothes and then go up there and kick ass." 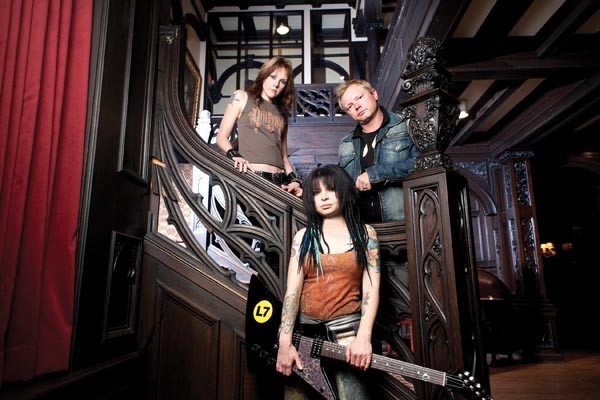 When Motorpsychos founder and guitarist Pam Simmons deadpans that she's going folk-rock for their next album, it generates laughs all around in the band: It's because Motorpsychos have been around, in one form or another, for nearly 13 years, and in all that time their signature aggressive punk-metal sound hasn't lost its edge.

While life goes on for Simmons and bandmates Amy Bianco and Dennis Brown, it doesn't slow down their appetite for rock. All three are married (Simmons and Bianco both to musicians), and Simmons has a daughter. ("But she's old. She's yelling at me now," she notes.) But earlier this year, the band came out with its fourth album, Sheppard's File, and Motorpsychos gigs still come around with regularity.

"Amy pointed out that every song on the album is about something that makes us uneasy, something that we're afraid of, something we need to get out of or did get out of," explains Simmons. "It's named for someone who we didn't know of until Amy introduced us to him, some dude named Jack Sheppard, and he was a petty criminal in the 1700s, and was jailed several times and escaped every time.

It's not a concept album, per se — that'd be taking it a bit too far — but it's far from the simple "It's just rock, duh" stuff you might expect from a band called Motorpsychos. But Motorpsychos delight in messing with your expectations.

"We like to hear, 'When I saw girls, I thought, "Whatever," but you guys rocked' — I love hearing that!" says Simmons. They're unanimous in saying there are certain biases that come with being a band that's fronted by women.

"We feel it most when we play out of town with bands we don't know," says Brown. "We'll see a female act go up before us, and then we'll go up and people will be thinking, 'Great, some more of this bullshit.' Then we'll get up there and rock it out, and people are not expecting that."

"We're the same as everyone else, though," notes Simmons. "We have expectations for what those all-female bands will be like."

She starts to describe one band Motorpsychos shared a bill with that was "all about the makeup," then stops herself. "I am too! I like to be all about the makeup and the sexy clothes and then go up there and kick ass. That's my favorite thing."

"That's where her and I are different," notes Bianco.

Simmons, whose favorite band is L7, says that when she first set out to form Motorpsychos, she was looking to do an all-women band.

"I like women rocking really hard. And spitting. And ..."

"Flinging tampons," Simmons agrees. "But I like that hard-rock sound coming from women. It always intrigues me to this day when I see a woman guitar-player. I initially tried to pull together [an all-female lineup], but there was no girl who could drum well, who we met. It still intrigues me, but that's not a parameter for who my band is."

The all-women-plus-one-man band recorded Sheppard's File in Brown's basement studio; it sounds remarkably good for an album with such humble origins. "Our vocal booth was a bunch of spider webs, a big piece of foam, a Navajo blanket," Simmons says. "It had to come down when his wife had to put a load of laundry in."

It's a brutal record, more on the metal end than punk.

"There was a morose vibe to this CD," says Simmons. "It's my favorite CD [of ours]; I like the writing best, I like the performance. But on my part — I hesitate to use this word, but it's indulgent. Everything is about something real, and it had to be done."

It might be a stretch to call this the Motorpsychos moment — this is a band that's been around for some years, and the members have reasonable expectations. "We're not really looking to be rock stars," notes Brown. "But what we have going is nice."

Still, it might be something of a second wind for the band. They note that the metal scene in town is as organized as it's ever been — "That's Innervenus," Simmons says, referring to the collective whose Iron Atrocity comps have given exposure to dozens of local bands. And there are always new fans cycling in to take the place of those who don't get out as much anymore.

"We still get a lot of 'Oh my god, I never saw you guys before,'" Simmons says.

"There are people who have always been around but who we only see every once in a while," says Bianco. "Because they have kids, and — "

Even as the band gets ready to turn 13, there's no Barcalounger in sight for Motorpsychos.

"I think we're too lazy to stop," Bianco says with a laugh. "We've been doing this so long, I don't think we know how not to."