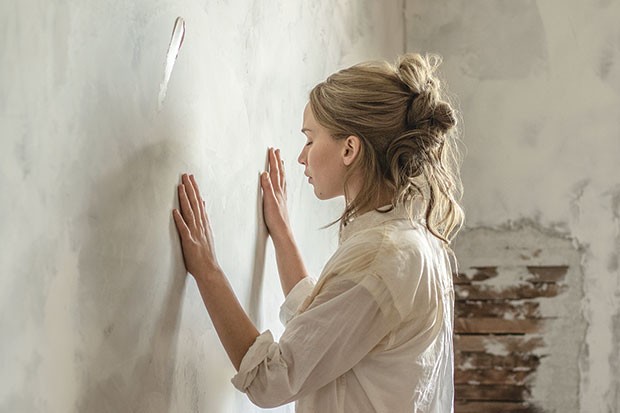 Darren Aronofsky’s mother! is one of those polarizing movies. For real: The dude sitting next to me at the screening stomped out, loudly declaring, “Well, that was a terrible movie.” And if you were hoping for a standard spooky thriller with a tidy plot, this would be a fair, if perhaps overly harsh, critique.

I liked it, but I’m OK with a hothouse of a psychological horror film that is both spare (with a fair amount of not-much-happens scenes) and over-stuffed and frantic. I’m along for a ride that has elliptical dialogue, nonsensical characters, grisly and disturbing imagery, and mystifying throwaways (hey, a frog!). Plus moments of pitch-black humor and Michelle Pfeiffer in her best role in years.

Somewhere in the country, a couple is living in a big octagonal Victorian house. He (Javier Bardem) is a poet with writer’s block; his much-younger wife (Jennifer Lawrence) devotes herself to restoring the home, which has suffered a catastrophic fire. Both appear to be hiding high-strung natures beneath stilted polite conversation. Things begin to unravel when the doorbell rings — a man (Ed Harris) has mistaken the house for a B&B, and is invited to stay the night. Everything else you should just see yourself.

Folks with a shelf of Criterion DVDs will nod at allusions to Roman Polanski’s Compulsion and Rosemary’s Baby; Luis Buñuel (particularly his dinner-party-from-hell, The Exterminating Angel); who knows how many other arthouse classics; and even those junky my-beautiful-house-is-a-source-of-terror faves, like Pacific Heights.

This movie gave me some serious FOMO about what allegories I was neglecting to process — every scene seems pregnant, up to and including an actual pregnancy. (This is a movie that opens with a shot of Jennifer Lawrence placidly burning to death — that’s got to mean something!) By the last scene, some of the extra-narrative material is obvious — it’s working through creation, destruction, re-birth, gender roles, fandom and religion. But don’t expect everything to be explained or to make sense.

The actors are all good — it feels like a cinematic in-joke to have noted intense actor Ed Harris ring a doorbell late at night; that can’t end well. Lawrence has the trickiest role, as her character is an enigmatic emotional cipher with a suggested affinity for the supernatural (she can “feel” walls), and a normal person trying to corral the craziness that nobody else but she (and we) are seeing

mother! begins rather slowly, but by the end it’s a swirly, surreal, shockingly disgusting head trip that is pelting you with allegories and freakiness. You may find it “terrible.” Or thrilling. Or pretentious. But it’s a good bet you’ll leave with an opinion.