CP photo by John Colombo
Jason Sauer and Nina Sauer at Most Wanted Fine Art
When Jason Sauer says he’s looking for the next big thing, he means it literally. After all, his art projects have included transporting a gaudily painted car to Queens, N.Y., only to drop a two-ton safe on it. Twice.

So it’s no surprise that, even after a decade on Penn Avenue, Sauer and his wife, Nina, say their lively gallery, Most Wanted Fine Art, has outgrown its current location. They’ve put the three-story brick building up for sale and plan to construct, pending city approvals, a spacious gallery and museum on an empty lot a few blocks up the hill, on Hillcrest Street near Garfield’s Healcrest Farms.

The museum will house a studio/garage so Jason Sauer can pursue his singular passion for making fine art out of demolition-derby cars, and for exhibiting similarly large-scale works by him and other artists. Most Wanted will continue its mission as “a community-service organization disguised as an art gallery” with ongoing artist-in-residence programs; a program that teaches construction skills to men recently released from prison; and education initiatives like a women-only car-diagnostics class. The Sauers, who live over their Penn Avenue space with their 5-year-old son, Rowdy, will move into a house they are renovating near the planned new gallery.

Garfield’s stretch of Penn has changed significantly since Most Wanted joined the burgeoning arts district, in 2007; even after the city’s years-long street reconstruction, which drastically reduced traffic to the neighborhood, it’s got fewer vacant storefronts and a somewhat sleeker vibe. “I’m going to miss my 18 feet of Penn Avenue,” says Jason Sauer.

And Penn will miss Most Wanted’s presence as one of the corridor’s more established venues, especially during the monthly Unblurred gallery crawls. “In some ways it will be a loss for the avenue,” says Rick Swartz, executive director of the Bloomfield-Garfield Corp., a community-development group for which the garrulous Sauer works part time as an events and volunteer coordinator. Local artists, hundreds of whom Most Wanted has hung, will miss the monthly shows there, as Sauer moves to a quarterly exhibition schedule at the new space.

Most Wanted’s final scheduled event at 5015 Penn is the Fri., Feb. 3, Unblurred, featuring art by Joshua Hogan and Kyle Ethan Fischer. Pop-up events will continue there until the building is sold. “We’ve had a good run here,” says Jason Sauer. But while he remains dedicated to Garfield, he adds, “I’m ready for bigger stuff.” 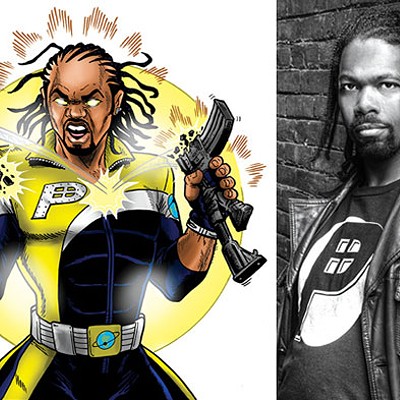