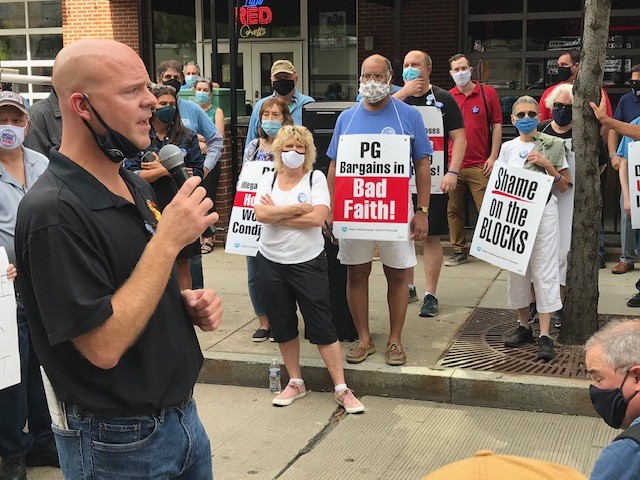 To the guild, this announcement from management was an “unlawful declaration of an impasse,” and so the union members set into motion the wheels of a strike. Since then, the guild has gathered support from leaders and institutions around the region, and got the endorsement of its parent union, The Newspaper Guild. Now the strike authorization awaits a decision from the Communication Workers of America.

But the theme of a rally held today outside of the Post-Gazette offices was about trying to avoid a strike. More than 100 rally-goers, including P-G guild members, other local union members, and Democratic politicians met in the street to decry the tactics used by P-G ownership. The message was the workers are ready to strike, but would rather restart talks to get a fair contract.

“This is more than a newspaper, this is a way of life, good journalism,” said Darrin Kelly of the Allegheny-Fayette Central Labor Council. “This is a last ditch effort. You have left them absolutely no choice.”

Guild members haven't seen a raise in more than 14 years, and their contract hasn’t been renewed for more than three years. Over the last couple years, the work environment has been chaotic at the P-G, with owner John Block throwing a late night newsroom tirade in 2019, former executive editor Keith Burris writing and publishing racist editorials that the guild has openly protested, and management barring Black journalists Alexis Johnson and Michael Santiago from covering Black Lives Matter demonstrations.

Kelly said that many of the elected officials in attendance had already sent letters to the Blocks asking them to negotiate with the guild, and he encouraged others at the rally to do the same.

Through all of this, dozens of journalists have quit the paper, some accepting buyouts and others moving to different cities. P-G ownership have justified cuts and buyouts by saying the paper is losing money every year. The guild counters that by saying Block Communications, which owns many media companies, is profitable as a whole.

Jonathan Silver, unit chair for the guild, spoke at the rally about his former colleagues who have left the paper, saying he has “watched Pulitzer-prize winning colleagues leave because they cannot take the toxic environment.”

“There is dignity in our work,” said Silver. “But that work deserves to be fairly compensated.”

Silver acknowledged the role that the Blocks played in keeping the paper afloat during the 2008 recession, but said moving forward they cannot place all the burden on the union members' backs.

Attendees also pointed out that ownership has retained lawyers for years from the firm King & Ballow and likely spending millions in order to draw out contract negotiations with the union.

The rally lasted about an hour, and high-profile politicians like Lt. Gov. John Fetterman (D-Braddock) and state House Minority Leader Frank Dermody (D-Oakmont) spoke in support of the guild. Pittsburgh Mayor Bill Peduto also addressed the crowd and said the journalists were not going through this alone.

“Labor movements were built on this ground,” said Peduto, referencing the storied labor history of Western Pennsylvania. “There has never been a time in American history that a free press is more important.”