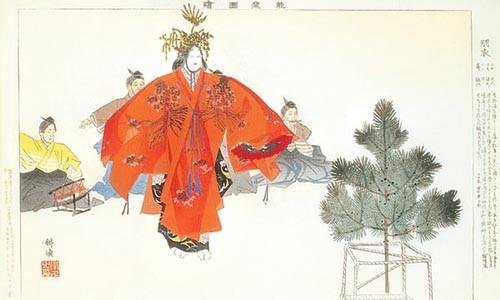 I am not used to looking at art through an anthropological lens. But The Frick Art Museum is contained within the Frick Art & Historical Center, and to a viewer without explicit knowledge of the organization's mission, the museum's spellbinding survey of Japanese woodblock printer Tsukioka Kôgyo seems to place its emphasis decidedly on the historical.

This is anything but bad: Kôgyo's masterful prints are laid out amidst a plethora of wall texts which illuminate the transitory social, political and technological environment that undoubtedly informed the artist's life and work. The audience is treated to an elegantly condensed account of Japan's 19th-century Meiji "Restoration," which transformed the country's governmental hierarchy, and thus its economy, and its art market. The print industry out of which Kôgyo blossomed had long been reliant on the interest and approval of the feudal shogunate (read: government). After the Meiji ascendancy abolished feudal domains, the print market fell into the hands of a rising merchant class, replete with a more secular imagination.

Ukiyo-e, generally translated as "pictures of the floating world," is the print movement which flourished under this new patronage: The content expanded from Japanese cultural propaganda to Japanese merchant-class propaganda. As the show catalog puts it, the images sought to amuse and relax as "a reminder of physical happiness and a temporary escape from the social constraints of the military rule."

In this light, Kôgyo's lifelong fixation on Noh, Japan's fascinating classical theater tradition, is a resistance to this new movement. Not that Noh went undepicted by other Ukiyo-e printers. But Kôgyo's work, decade in and decade out until his death, in 1927, offers up depictions of Noh that are stoic, reverent and mystical; in short, his aesthetic universe is anything but "amusing."

The show is curated by Richard Smethurst, Mae J. Smethurst, Thomas Rimer and Robert Schaap. On view are dozens and dozens of extraordinary prints that paint a nonlinear picture of Japan's Noh theater. The Noh tradition is a cornerstone of Japanese cultural identity, centuries in the making and visually arresting. The vast majority of Kôgyo's Noh works are depictions of single characters against blank planes, or backdrops of lush, gradated printing that suggest watery brushstrokes rather than painstakingly carved wood. Kôgyo's Noh actors are chiseled blotches of patterned fabric and masked faces that dominate and define otherwise minimal compositions and, to the unindoctrinated, appear disconnected from their conventional role in a larger dramatic narrative. They suggest movement and expression, but stand still and stoic.

Kôgyo often supplemented the images with discreet text naming the character or giving the image some context within a traditional play. Yet given his life-long fascination with Noh, it is plausible to assume that Kôgyo had aesthetic fixations on the theater that remained independent of, and perhaps even dominated, his desire to reinforce Japanese cultural history.

This is where the Frick falls short: Almost every wall text (each print has its own) simply explains the Noh context for which its accompanying character applies. Occasionally a technical reference to the printing process is added. However, there is no attempt, by the curators, to address Kôgyo's aesthetic development over the course of his lengthy career. Such information would add to the show immensely, and its absence is mystifying. Perhaps the curators felt that art didactics, as "speculation," were inappropriate to include -- unlike historical didactics, which are "facts."

My question is: Why present such a well-curated and extensive selection of images if the viewing public will be so heavily encouraged to treat it as a cumulative historical placeholder? It would seem more fitting to curate an era-specific group show, rather than rob Kôgyo of a well-deserved individual artistic discussion.

Context aside, these prints are phenomenal, and the exhibition is intricately designed. Kôgyo's Noh is opaque and haunting, a discipline abstracted to its most otherworldly form. This master printer's work is worth extended contemplation, even if you might read otherwise.