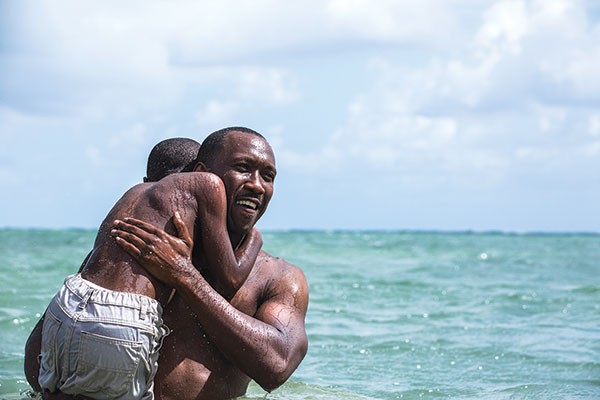 Set in Miami’s tough Liberty City neighborhood, Barry Jenkins’ luminous, deeply affecting Moonlight tells the story of one boy’s journey into manhood and self-discovery. The work is adapted from Tarell Alvin McCraney’s semi-autographical play In Moonlight Black Boys Look Blue, and incorporates material from Jenkins’ life (both men grew up in Liberty City). The story is told in three acts, depicting the protagonist as a child, a teenager and an adult.

We meet Chiron, a.k.a. Little (Alex R. Hibbert), a gangly toothpick of a kid, escaping bullies. Neglected by his mother (Naomie Harris), he finds a friend in Juan (Mahershala Ali), a drug dealer who, beneath his street-ready hardness, is sensitive to the boy’s need for nurturing. Little nominally has one friend, the livelier Kevin, who tries to school Little to adapt to the rough-and-tumble ways of boys. Things don’t improve much when Chiron (Ashton Sanders) is a teenager; he’s still quiet, still bullied at school, still worried about being gay, and his home situation is even worse.

Moonlight is a beautifully layered film filled with so much emotional content and lyricism. Jenkins employs intimate camerawork, immersing viewers in Chiron’s fraught spaces. (When Juan teaches Little to swim, the camera is set at the waterline where waves occasionally obscure our view.) Scenes of devastating beauty pair with those of matter-of-fact sadness. The acting is superb throughout, with all three Chiron actors mastering a particularly tricky character, one who barely speaks and works (not always successfully) to keep his vulnerabilities hidden.

This is not simply a coming-of-age story. There is much here beyond Chiron’s bumpy transformation; Chiron’s identity — poor, black and gay — is a triple play that seems irresolvable to him. It’s notable that Moonlight presents this specific set of identities so rarely explored in popular film, yet part of what makes the film so resonant is the space it provides for other experiences and resulting empathy. How do we know ourselves, and what version to present to others? What is the cost of conforming to expected roles, such as the hard masculinity dominant in Chiron’s world? How to make emotional connections, in spite of and because of, hurt and betrayal?

The final act catches up with grown-up Chiron, now known as Black (Trevante Rhodes), and is dominated by his reunion with his old friend Kevin (André Holland). Like all the film, the third act is carefully crafted, from its jarring introduction to its quiet moments of resolution. Jenkins also offers callbacks to moments from the two earlier acts: the trading of food for conversation, a pot of boiled water, aspects of Black’s appearance and, indelibly, Black’s longing for connection. It ends as it began, in a bittersweet spot between heartbreaking and hopeful.