“As queer people, we have to laugh and be able to see beauty.” 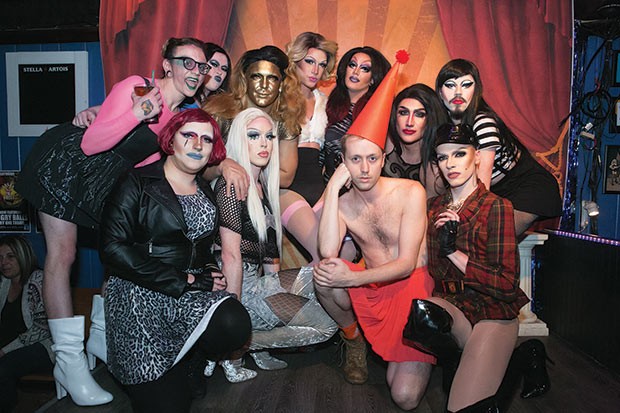 Pittsburgh’s moon baby is a drag queen, and a pop star with mythology and attitude. Everything she does is thought out and intentional, but delivered with cool-girl ease. Barbara, moon baby’s latest musical effort, is six songs of dirty, genre-bending pop produced with long-time collaborator Wise Blood. At times, Barbara makes you want to dance, and at other times, it makes listeners want to toss a Molotov cocktail at Trump Tower. It’s sometimes silly, but in other moments, it is filled with personal and political darkness.

“I like to have playfulness with dark themes, because I think as queer people, we have to laugh and be able to see beauty. I love drag-queen music that’s about getting ready and talking shit and all that, but there’s a space for that, and I don’t find myself to be that comedic character anymore,” explains Sam Perry, the brain and body of moon baby.

The release packaging is incredibly intimate: a cassette delivered in a hand-painted box and tied with a pink bow, filled with six chocolate truffles themed for each track, a zine and tons of adorable beads and flair.

“The A-side [of the cassette] is the release, and the B-side is a 24-minute-long ASMR recording of essays I wrote. I won that Up and Comin’ Grant through Martin Guitars, so I chose to do this with it,” says Perry.

The packaging suits moon baby’s savvy — she is an entrepreneur, after all. She sells her very own “cereal” called Maralago, essentially a cereal-shaped box that comes filled with sand and golf balls.

“Maralago” is also the name of the album’s first single. “I needed a single cover for ‘Maralago,’ and I love the idea of moon baby as this semi-failed pop star now as a semi-failed fragrance maker. Like Mariah Carey coming out with a fragrance — nobody has any business doing that, but they do it because they need the money or whatever. The idea of moon baby coming out with a cereal is hilarious. With Maralago, using the Wheaties idea of sports and athleticism made sense,” Perry says.

But for Perry, moon baby is more than just an art project or a drag persona. She’s an entity that can be used to explore Perry’s own gender fluidity and queerness.

“I recently realized that I started out trying to do monster-weird drag, and then I moved into hyper-feminine drag. Now, the way more freeing space for me to be in, which is more challenging to me, is to be more masculine characters, maybe to be a drag king,” Perry says.

He talks about the time he joined the band slowdanger, during a performance at the Carnegie Museum of Art. “I got really upset because I didn’t feel pretty. So, then I turned myself into this monster. And at that moment I was able to understand that my drag reflects a little too much how I want to feel. So in the moments I don’t feel perfect in drag, it’s almost dysphoric,” says Perry.

“But turning myself into this weird geometric monster, I felt like I gave the best performance I could, because I was ready to go and amped up on that energy. Because I feel like playing with gender or fucking with gender is a really important part of drag.”

The name of moon baby’s latest EP is rooted in Perry’s early days of drag, derived from a nickname a drag sister Cherry Bomb bestowed upon them.

“Drag queens give each other nicknames, which is funny because your drag name is a nickname. When I started doing drag, my drag sister Cherry Bomb used to call me Moon Barbara,” explains Perry.

“I’m always working on creating these mythologies to moon baby, and I had this idea that maybe moon baby isn’t an alien, but a nerdy girl who falls in love with Neil Armstrong and went to the moon, so he found her there, and when she came back to Earth, [she] started calling herself Moon Barbara.”

Here on Earth, moon baby’s social-media posts aren’t stiff and formal like most official band PR. Instead, it feels like she’s addressing her dearest friends. On the eve of the Barbara-release party at Ace Hotel last month, moon baby offered free admission to the show to the first individual who could bring her some lube for her post-performance celebration with her boyfriend.

“I do feel like this is how it is, and I want it to feel like [moon baby] is just somebody’s friend. Even at the [release] party, I was going up to everyone and thanking them all for coming. I want moon to be that low-key party chick that happens to make music. And I think that’s what I want her to come across as, and I think that’s what I need her to be for me personally.”

Now that Barbara has been released into the world, Perry plans to try out some new skills.

“I really enjoy working with Wise Blood, and [production] is very much my language now. But he came to the release party where I played with some live musicians, and he was very invigorated by that. I love the improvisational style of performing with musicians, so I think I want to learn to work with live things,” says Perry. “It excites me a little more.”

Perry’s vision for moon baby is not one of fame, but Perry is still ambitious. As Ms. Club Pittsburgh, moon baby co-hosts a monthly party under the project Hated Inc., with her best friend, Josh Bondi, and Perry would like to curate more events featuring queer talent from Philadelphia, Chicago, Washington, D.C. and Pittsburgh.

“It’s pretty obvious that the performers who live [in Pittsburgh], if we lived anywhere else, we would be more successful, and that’s hard. But it’s nice to have free reign and do whatever you want.”

“And the rent’s low,” Perry adds with a laugh.

Ultimately, the entire project is about having fun with drag and pushing personal creative boundaries.

“There’s this certain kind of drag culture centered around Instagram fame and all these things, and I don’t need to be a Myspace star — I never was a Myspace star. I’m not going to audition for [RuPaul’s] Drag Race. I do drag just because I love to, and it’s cool that my friends love it.”