If a honky-tonk designed after The Crow sounds appealing, you might enjoy Obscure 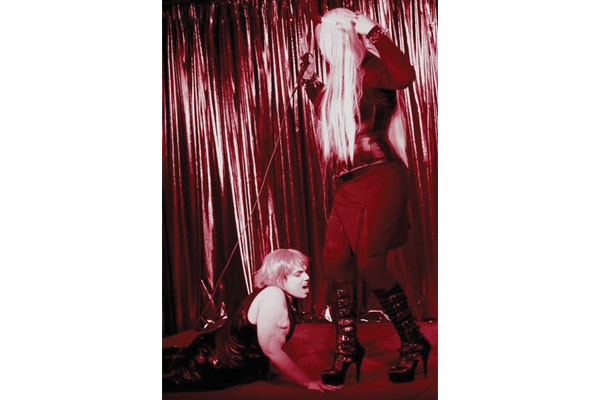 Whipping it up at Obscure

In the bar Cattivo, nestled between townhouses blocks off Butler Street, there are nights when the lower floor transforms into a bacchanalia, celebrating things even a Lawrenceville barfly would think twice about mentioning to her mother.

Obscure, which Cattivo hosts on the first Friday of every month, was started in January by Hyper Reality Productions. This brainchild of performer Devon Mavrik was meant to correct what he saw as glaring absences in town. "Even though it makes sense that the leather, drag, burlesque and goth communities would be interlinked," says Mavrik, Obscure is the first regular show to integrate them. There were multiple burlesque troupes operating in Pittsburgh, but no regular venue for them. There are drag nights, and goth nights, but no gothic drag nights with a St. Andrew's Cross in the dungeon.

That back room is a hard sell for many people, especially given 50 Shades of Grey and fears about unsafe kink. So Obscure staff follow the leather-community slogan "safe, sane and consensual."

"It is a fully supervised kink space with play-space monitors on staff as well as one person on staff who is EMS-certified," says Mavrick. Users must sign forms agreeing to rules instituted by both the organizers and the bar, including: "no means no," "absolutely no alcohol inside the play-space" and universal safewords.

Obscure's stage harbors a broad spectrum of performers and styles of burlesque, from the feathered fan-twirling of Old West saloons to more modern concepts like boy-lesque, which lets the menfolk strut their stuff. Of course, there's also an onstage coterie of cybergoths and reanimated corpses to remind you what the night is all about.

If a honky-tonk designed after The Crow sounds appealing, you might enjoy Obscure. Sometimes the acts are pretty high-concept. (Think: performer portraying his own resurrected spirit becoming part of "the universal machine.") But even if you don't know what's going on, the clothes are always fancy.