When we wandered into Monterey Pub, a North Side Irish tavern, Pittsburgh was still reeling from the most glorious St. Patrick's Day in local memory. If the unseasonably warm weather didn't exactly put us in the mood for wintry cottage fare, we looked forward to enjoying some Irish good spirits in a more restrained atmosphere than the holiday's recent bacchanalia.

Actually, on a post-Paddy's Day Tuesday night, the place was crowded and full of lively conversation. Embedded in the midst of the Mexican War Streets (and so named for Monterey Street, not the faraway town), Monterey Pub acts as something of a neighborhood clubhouse with an open-door policy. Text at the bottom of the menu conveys a homey note, with meats and bread credited to North Side purveyors and desserts to "Mara's mom."

The contents of the menu suggested a kitchen committed to classic pub grub and Irish standards (such as "bangers and mash"), while trying to keep things interesting with the occasional Asian flourish or unexpected ingredient mash-up. Wing sauces included Thai red curry; fried green beans with "dynamite" sauce stood in for the ubiquitous zucchini with marinara; and BLTs came in three styles: traditional, English (on marble pumpernickel-rye with double Gloucester cheese) and salmon.

We started with the fried green beans and found them a worthy alternative to played-out traditional fried appetizers. Crunchy-tender green beans were battered, fried and served in a heaping basket with a cup of the spicy dynamite sauce (which appeared to be mayonnaise mixed with fiery Sriracha). Nothing about it was rocket science, but the use of green beans was a winning innovation: With their own pods protecting their tender interiors from the intense heat of the fry oil, they emerged with texture and flavor deliciously intact, something that can't always be said of zucchini.

We also added wings to our starters list: They were moist and satisfying, their crisp exteriors punched up with a house dry rub whose seasonings bore a family resemblance to those on the green beans. 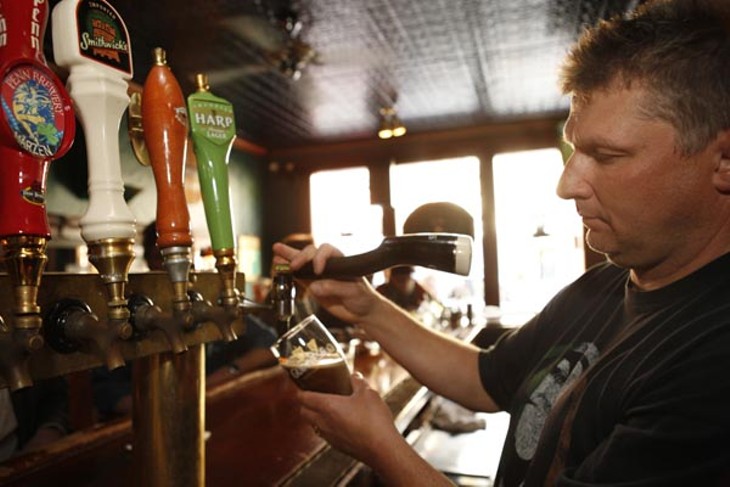 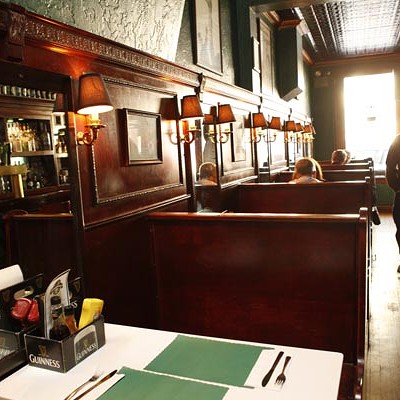 Besides the appetizers, the menu consisted mostly of a large selection of sandwiches and burgers, with "Irish pub fare" broken out as a distinct category; a couple dinner plates rounded out Monterey's offerings. We were intrigued by the Irish Cuban sandwich, consisting of sliced roasted pork loin, bacon, melted Swiss cheese, honey mustard and guacamole on wheat bread. We expected the sandwich to come pressed flat in the Cuban tradition, but its stature was Dagwood-esque, reflecting the substance of the ingredients inside. Jason found it excellently savory and juicy, but he must have gotten all the good guacamole bites, because Angelique found it necessary to moisten her portion by dipping it in some horseradish sauce that, by rights, belonged to our burger.

For its part, the British Isles burger (other choices included the Dublin burger, the Mexican War Streets burger, and the North Side Epic burger) was a standard, oversized pub patty, made distinctively flavorful by toppings of sharp double-Gloucester cheese and horseradish-enhanced "signature pub" sauce.

The items we sampled from the Irish pub-fare list ranged from pretty good to very disappointing. In the former category was bangers and mash, with smooth and fluffy mashed potatoes and good hearty gravy. Only the fact that the sausage had been overcooked kept this dish from greatness. As it was, the bangers had developed a too-crusty surface, which distracted from the dish's other, softer textures.

In the latter category was, unfortunately, the shepherd's melt, a delectable-sounding combination of braised spring lamb, caramelized onions and cheddar cheese on toasted rye. Angelique had pictured this as an open-face sandwich, to be eaten with a knife and fork, but that was not the case. The traditional sandwich format would have been fine if: there been more than a trace of melted cheese; the caramelized onions had contributed any detectable softness and sweetness; and, most damningly, the lamb had had not tasted like it had been kept braising long after its liquid cooked off. As it was, this combination, between two slices of bread, was unconscionably dry and virtually tasteless.

Monterey Pub largely succeeds in importing the British — or, in this case, Irish — pub tradition to Pittsburgh. Where its food falls short, its atmosphere of neighborly conviviality picks up the slack. So go ahead and have a Guinness — it is, as advertised, "good for you."