Mongol, a film about Genghis Khan, is necessarily pretty speculative. Such are the limits of biographical research into 12th-century Central Asian grasslands. But while director Sergei Bodrov doesn't "update" history with hand-held cameras or a techno soundtrack, his film busily makes a case for antiquity's greatest conqueror as a horseback-riding, sword-wielding proto-modern man.

Mongol follows young Temudgin, the future Genghis Khan, from childhood to his unprecedented unification of the nomadic tribes of Mongolia; such exploits as the conquest of most of Eurasia yet await. Temudgin is himself the son of a Khan, or "ruler," but the privilege is relative: Even in 1172, nomadic shepherds were a marginalized people, further riven by clan rivalries, and Temudgin spends most of his youth under a death sentence (from a family enemy) and no small part of it enslaved.

The film's historically sketchiest chapters -- let's call them "Genghis: The Early Years" -- are fleshed out by Bodrov and co-writer Arif Aliyev with a mix of old-fashioned (if beguiling) character development and pure myth-making. Little Temudgin's first act is to defy his father: At age 9, he chooses his own future bride, foreshadowing his adult audacity in upending standard-issue warlordism. Meanwhile, Bodrov suggests that his hero's repeated appeals to the divine (the Mongol sky-god, Tengrin) are quite successful: Temudgin's triumphs as a warrior, law-giver and even husband seem somehow mystically ordained.

Bodrov, an esteemed, Russian-born filmmaker (Prisoner of the Mountains), grew up in the former Soviet Union, where schoolbooks profiled Genghis Khan as a bloodthirsty barbarian. But the filmmaker's adult fascination with Genghis has yielded a character whose martial skill, romantic fortitude and sense that he's ordained to unify his people make him seem some combination of Bruce Lee, Dr. Zhivago and Moses.

In the person of the wonderfully reserved Japanese actor Tadanoba Asano, Temudgin -- product of a culture where a horse is harder to replace than a wife -- is a romantic before his time, sharing an unbreakable bond with his mate, the beautiful and dauntless Borte (played by Mongolian newcomer Khulan Chuluun). This seems of a piece with Temudgin's other innovations: In Mongol as in history, he gives away his plunder; he neither abandons his clan's women and children to enemy forces nor kills the children of vanquished foes; and, though divinely inspired himself, he remains respectful and tolerant of other religions ... at least those that submit to his rule.

In depicting Temudgin's defiance of hidebound tradition, Bodrov himself bends a few rules of the epic drama: When Temudgin's alliance with a blood-brother no longer comports with his own sense of destiny, he simply breaks faith with the sort of loyalty that's generally celebrated in movies full of swordplay and copious spatters of digital blood.

After all, it's not history's remorseless recital of slaughter Bodrov wants us to reflect upon. Nor is it just this handsomely shot film's frequent and splendid digital storm clouds gathering over vast, tractless steppes, nor the Mongols' even more splendid fur hats. Rather, the film is simply about the heroism of Temudgin himself.

To a degree, of course, his singularity warrants that. "Like all great revolutions," historian Felipe Fernández-Armesto has written of the Mongol conquest, "the episode began bloodily and became constructive." Widespread slaughter (which continued under Temudgin's descendants) begat what another historian has called a Pax Mongolica -- linking the two halves of the Eurasian landmass culturally as never before, helping pave the way, for better and worse, for modernity.

But in dramatizing the forces that formed Temudgin, and speculating about what drove him, might Bodrov be humanizing him too much? Sure, there's a good bit of mystery left intact about the man who learns to stare down the thunder that paralyzes other Mongols with terror. And alongside depictions of his pastoral family life, we see Temudgin's steel, and hear it in dialogue like, "Mongols need laws and I will make them obey, even if I have to kill half of them." (Though even that rather pales next to his most famous quote, here absent: "My greatest joy is to shed my enemies' blood and wring tears from their womenfolk.")

A better film might have humanized Temudgin's foes, as well -- made us feel horror along with our awe for one of history's most remarkable leaders. (Admittedly, of course, the worst of his campaign of terror, from the Caspian Sea to Peking, postdates the events in Mongol.) In Bodrov's vision, Temudgin's obsession is merely the crucible of modernity, foretold in the electric guitars that ring with the film's closing credits like the flat of a scimitar crashed suddenly to the temple. In Mongolian, with subtitles. Manor 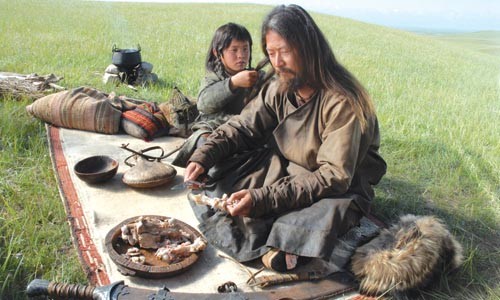