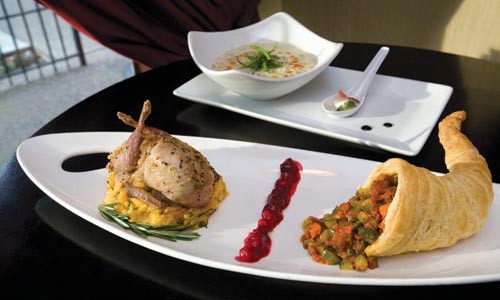 
Everyone can use a little mojo. Problem is, it's not always there when you need it. That's why we were thrilled to find a place where food, atmosphere and service all conspired to cast a culinary spell: Bellevue's Mojo Bistro. And we'll tell you where to find it, too.

The latest addition to Bellevue's varied and enticing retail mix, Mojo Bistro is set apart from the critical mass of restaurants, shops and diners on the main drag of Lincoln Avenue. Though it shares that address, look for Mojo not in the center of town, but almost a mile away, at a picturesque S-curve in the road as it approaches the Pittsburgh city limits. The location, surrounded by handsome old houses and trees, highlights the warm, inviting storefront, making Mojo the focal point of this lovely, leafy turn-of-the-last-century neighborhood.

Inside, the space is as intimate and cozy as a café. The owners have forsworn sleek modernism for the textures of a tin ceiling, richly stained wood floors, silk drapes and brushed khaki walls. Framed mirrors add the only gleam in an interior otherwise rich in patina.

We sat at a tall table in black-lacquered bar seats to peruse the menu, two pages of bistro fare that was anything but standard. Though the classics -- steak, fries, fish and salads -- were present and accounted for, Southern and Asian influences inflected almost every dish. Thus, the fries were sweet potato, the fish atop red beans and rice, and the surf-and-turf was Asian-style, complete with jumbo lump crab maki. We felt the mojo begin to take hold.

Sadly, the kitchen was out of sweet-potato fries, but that gave us an excuse to try the polenta stack. This turned out to be a tower of small blocks of creamy corn mush, fried to a crouton-like consistency. The menu told us, and our server confirmed, that the polenta was "laced" with caramelized onions and roasted garlic, but we must admit that we couldn't discern these flavors. Nonetheless, we were happy with what tasted like a tomato-chipotle relish, ringed by a balsamic reduction.

We also whet our appetites with the chicken and wild rice soup. Though thick and rich, it defied the bland stereotype of this dish with plenteous chunks of meaty chicken and no shortage of spice. It was elegantly presented with one of those Asian-style porcelain mini-ladles filled with sour cream, minced red pepper and microgreens, a refined touch typical of every dish we ordered.

A tale of two salads starred Caesar, on the one hand, and the Mojo house salad topped, Pittsburgh style, with steak, on the other. The Caesar was well constructed of crisp Romaine and thin, chip-like croutons seasoned with Parmesan and herbs. However, it suffered from an unctuous dressing which rendered the salad course inappropriately rich. In contract, the house salad was studded with shaved red onion, crumbled gorgonzola, and caramelized walnuts, which added dimension to each bite without overwhelming the vegetal appeal of the field greens in a light garlic-Dijon vinaigrette. Steak and chicken were optional additions; the sliced steak was delectable, perfectly seared with salt and pepper and pinkly tender on the inside.

Curious about how the kitchen would handle an apparently straight-up Southern dish, Jason ordered shrimp and grits. As we might have guessed, Mojo's version wouldn't blend in at the Whistle Stop Café. A skewer of intensely flavored grilled shrimp sat atop a pool of grits that were creamy yet hearty, with the pleasantly gritty texture of cornmeal. Alongside the shrimp were small yet meaty strips of bacon and roasted green beans that had just begun to caramelize; a little more so, and they would have been superb. Diced fresh tomatoes added brightness, bringing all the elements into balance. Mama may not have made it this way, but maybe she should have.

Angelique had Asian-inflected pan-seared tilapia. The fish was extraordinary, browned in the pan to the point where the coating nearly resembled crispy chicken skin. Inside, the meat was tender and flaky, the perfect vehicle for a piquant coconut curry sauce. As a foil to the hot fish and sauce, the plate also featured a nest of cold cucumber "noodles" -- grated to the dimensions of spaghetti -- and a cold salad of firm wild rice. Both were dressed in a light, fruity dressing which paired divinely with the delicate seafood and spicy curry.

For supernaturally good food in a down-to-earth atmosphere, Bellevue's got some serious restaurant mojo going on, and it just keeps getting better.