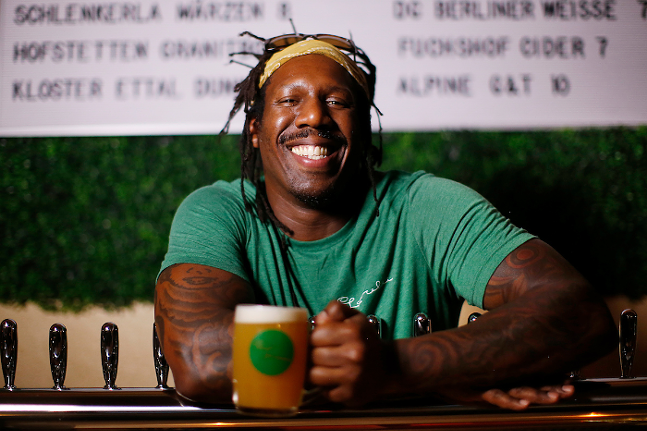 CP photo: Jared Wickerham
Byron Nash enjoying a beer a Lorelei in East Liberty. Nash will perform on the July 10 beer tour event.
Many restaurants struggled to stay afloat when their doors were forced to shut over a year ago due to safety precautions of the coronavirus pandemic, but some like local chain Moe’s Southwest Grille were able to persevere through the harsh circumstances with support from local communities.

Now, the local Tex-Mex chain wants to pay that back with a beer tour that supports Pittsburgh’s craft breweries starting Sat., July 10.

“Words cannot express the fear felt by anyone working in the restaurant industry in early 2020 and what we ultimately experienced was an outpouring support from the communities we have served for years,” said Mike Greiger, owner of a local Moe’s Southwest Grille, in a press release.

The “Thank You Pittsburgh Brewery Tour,'' run in collaboration with Easy Street Promotions, will be hosted by six local breweries, and will span from July 10 through Sept. 25.

“The ‘Thank You Brewery Tour’ allows us to show appreciation to our customers for supporting Moe’s — while also paying it forward to local craft brewers and musicians by bringing our collective customer base together to celebrate the undeniable resolve of the Pittsburgh region,” Greiger said.

The brewery tour events include live performances from different local musicians at each location, and Moe’s will be providing free food from their restaurant at each location including tacos, chips, and their well-known queso.

Helltown Brewing kicks off the tour on Sat., July 10 in Export. In addition to the craft brew and free Moe’s, Pittsburgh-native Byron Nash will put on an electrifying live performance.

The tour continues through the summer into the fall and officially ends on Sun., Sept. 25 at Full Pint Brewing in Warrendale in the North Hills. Other regional breweries featured on the tour are Acclamation Brewing, Cobblehaus Brewing, Allegheny City Brewing, and Black Monk Brewing.


A full schedule can be found at welcometogivingback.com.