Photo: Module
Rendering of the Module Black Street Development in Garfield.
Module, a local housing startup, will move into one Pittsburgh neighborhood with a new four-unit mixed-income development.

The company, which specializes in houses designed to “grow” with its buyers, closed on land and financing for a housing development in Garfield. Located on three vacant parcels on Black Street, the development will include one affordable house, one market-rate house, and a duplex.

Ground-breaking on the project, led by local contractor Blockhouse Residential, is scheduled for Nov. 26.

In a press release, Module CEO Brian Gaudio calls the development a “team effort.” Financing for the project came from Dollar Bank and Urban Redevelopment Authority (URA) of Pittsburgh, which owns the land. Module also partnered with the Bloomfield-Garfield Corporation and is working with several building product suppliers, including Lowes, Cobalt Creed, IKEA, Mitsubishi, and Dupont.

“Our team is excited to deliver high-quality homes and contribute to sustainable neighborhood development in Garfield,” says Gaudio, a South Hills native who moved back to Pittsburgh after earning his architecture degree from North Carolina State University and started Module in 2016. The "sustainable neighborhood development" refers in part to the homes being certified by the U.S. Department of Energy’s Zero Energy Ready Standard, a program dedicated to building more energy-efficient homes with sustainable, non-toxic materials.

“Module is creating innovative, smart homes that re-imagine the traditional notions of how families live,” says Jennifer Wilhelm, assistant director for the URA’s Center for Innovation and Entrepreneurship. “[Its] work will set a new standard for what is possible in home construction. At the Urban Redevelopment Authority, we recognize the power of innovation to change lives. It is for this reason that we are excited to support Module’s efforts.”

Since it first began, Module has looked to address the housing crisis in Pittsburgh with its approach to building versatile, expandable homes. Buyers can invest in a smaller space — its smallest unit, the Nook, measures around 640-square-feet — and add on to it to accommodate life changes, such as a new addition to the family or the need for a home office. 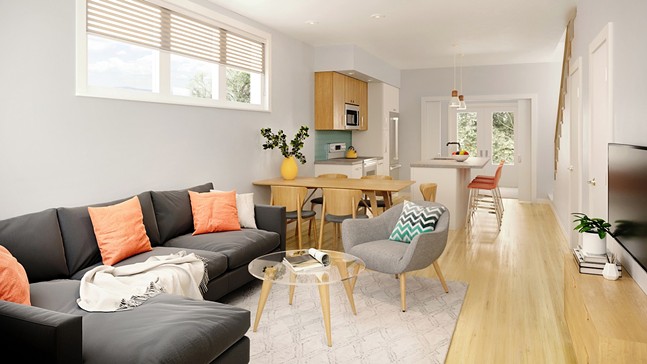 Photo: Module
Rendering of an interior for a Module unit on Black Street.
According to NEXTpittsburgh, plans for the Black Street development started in December 2018, when Module unveiled a proposal for the units during a URA public board meeting. In that proposal, the two-story homes were described as being around 1,200-square-feet and would sell at market value, while the duplex would cost around $200,000.

As stated in the article, the Module development was made possible by a Pittsburgh City Council vote in September 2018 that eased restrictions on allowing landowners to convert existing property into small occupancy homes of approximately 1,000-square-feet. It also gave homeowners more freedom to convert single-family homes, such as adding an accessory dwelling unit (ADU), more commonly known as a “granny flat.”

The legislation and subsequent Module development appear to address certain housing issues outlined in a 2016 study released by the Affordable Housing Task Force created by Pittsburgh Mayor Bill Peduto and the Pittsburgh City Council. That report estimated that the city faced an affordable-home shortage of more than 17,000 units. It also noted that wages had not kept up with rent increases over the past few decades, in effect pricing many lower-income residents out of the city.

The concerns have especially come to light in the wake of what city leaders and housing advocates see as gentrification in once-affordable neighborhoods like East Liberty. This includes the demolition of the Penn Plaza apartment complex that displaced hundreds of residents to make way for a new Whole Foods supermarket.

The Module homes are available for presale. Upon completion of the Black Street development, Module plans to continue building projects on vacant lots throughout the city.