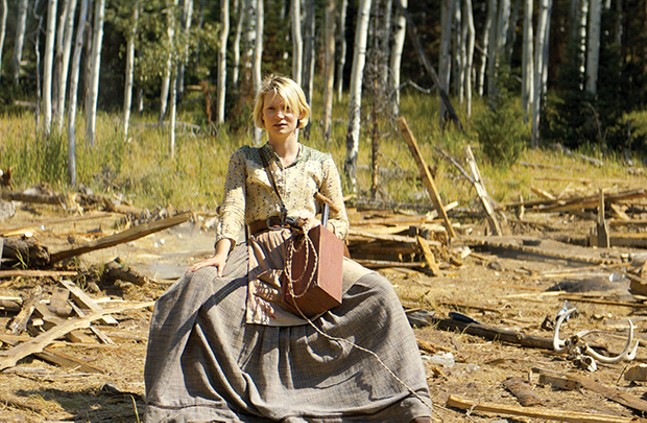 Modern Westerns often try to tackle tropes. In the slapstick dramedy Damsel, directors David and Nathan Zellner hone in on the “damsel in distress,” twisting the classic image of a heroic cowboy rescuing a helpless woman. The movie dips its toe into an interesting subject, but it never fully commits to a message or tone.

Samuel (Robert Pattinson) is a lovesick cowboy dressed like a member of Mumford and Sons, who hires a parson (David Zellner) to help him rescue his fiancée, Penelope (Mia Wasikowska), from a kidnapping. They ride horses, get in a gun fight and sing songs around the campfire before finally finding Penelope. It is then that we learn Samuel’s intentions are not as pure as they seem, and that Penelope was not exactly taken against her will.

Without giving away the twist, we see just how dangerous men can be when they feel wronged by a woman. Penelope and the parson then set out on their own journey, encountering Penelope’s angry brother-in-law and a Native American man along the way. Every male character in the film both tries to rescue Penelope and hit on her while she gets increasingly fed up. There’s more shooting, dynamite, a miniature pony and expansive landscapes. The characters don’t know where they’re going and never really figure it out.

Tonally, the movie can’t decide what genre or mood it’s going for. It’s unclear whether we’re supposed to laugh at the ridiculousness of both Samuel and the parson asking for her hand, or when her brother-in-law, dying from an arrow wound, tries to grope her in his final breaths.

The marketing for Damsel includes indirectly billing it as “a Western for the #MeToo era,” implying that there is something about this movie that is reactionary to the wave of confessions about Hollywood’s abuse of women. This is an easy and topical (but inaccurate) way to sum up what the movie says about women, which isn’t a whole lot. Sure, Penelope fends off unwanted attention, but the movie doesn’t do enough to either implicate the sleazy men or assert Penelope’s independence.

In one semi-climactic scene, Penelope yells “I don’t need anybody’s saving!” at the men who are constantly trying to rescue her. But just like much of the movie’s dialogue, the tone is off. Her anger feels less like a moment of empowerment and more like a half-hearted attempt to give her character agency.