Mitski on academia, egos and those moments that make everything worth it | Music | Pittsburgh | Pittsburgh City Paper

Mitski on academia, egos and those moments that make everything worth it

"I'm not the white boy. I'm not in a position to be heard whatever I make." 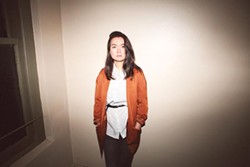 Photo courtesy of Kenneth Bachor
Mitski: "I want to make things that people can relate to."

There's this moment in Mitski's "Drunk Walk Home" — the seventh track on her breakthrough album, Bury Me at Makeout Creek — where the ground opens up and swallows Mitski whole, then spits out her anguish into something newer and fiercer and more fully realized. A plaintive "I'm starting to learn I may never be free" is followed by pounding distortion and a bottomless scream that escapes from a haunted, unguarded place. It's a volcanic eruption in an album of simmering stoicism.

Bury Me at Makeout Creek — yes, that is a Simpsons reference — earned a spot on many year-end best-of lists, leading to a re-release this April on Don Giovanni Records, home to female-fronted DIYers Screaming Females and Waxahatchee.

It's confessional folk with an anthemic Pinkerton sensibility. It soars as much as it crumbles. For the recent SUNY Purchase grad with two precious chamber-pop albums already under her belt, Bury Me at Makeout Creek is a wild ride that comes from a place of newfound vulnerability. "I don't want to make anything not honest, because I think people can ultimately hear that or see that," says Mitski, "and I want to make things that people can relate to."

You've been described as having an "academic musical background." What does that mean?

In my case, it felt like I already knew what I wanted to do or had something inside me, and then going to music school just gave me all these different tools to do that more smoothly. It means not having to ask for help as much.

How has your music changed since leaving that environment?

I've come to understand that songs don't have to be difficult or "smart" to communicate something. A lot of that has to do with ego. A lot of trying too hard comes from feeling like I'm not heard or feeling like I don't matter. I'm not the white boy. I'm not in a position to be heard whatever I make. So I went through a phase of wanting to be the best and the smartest, and I've kind of let that go. Not because I no longer have the desire, but a lot of simple things or things that are attached to feminine qualities, I suppose, for better or worse, are de-legitimized. And just writing a song about being infatuated with somebody is simple, but it's effective sometimes, and it shouldn't be seen as "less than."

You did an interview with Billboard where you talked about indie-rock elitism and de-legitimizing young girls' music fandom. What are you a fan of that you feel you have to defend?

There are lot of hardcore classical pieces that are thought to be so cliché that if you're in the modern world, you should be above it. You're supposed to understand atonal music and be really into Schoenberg. There's this trend, I guess, in thinking that melodic music or things that make you feel good are not intelligent. But sometimes you just have to listen to Beethoven's "Moonlight Sonata" and cry.

When I wrote that, in my mind it had double meaning. There's the straightforward: I refuse to follow what is expected of me. But that thought also stemmed from the fact that I spent my whole life trying to be what people wanted me to be, or live up to whatever was expected of me. Just trying. And so that line also reflects a really sad acceptance.

How do you manage to be a touring musician as an introvert?

Honestly, it can be hard sometimes. I think I need to restructure how I perform, because every night it's a purging process. This is probably not healthy, because every night I basically relive what I wrote. You have your inside self, your private face, and you have your public face. And when I perform I'm basically exposing my private face really brutally. And then I'm supposed to walk off stage and really quickly put on this public face. But sometimes switching that quickly is quite difficult.

Being able to support myself at least a little bit doing I think what I'm best at makes me happy in the broad sense. But it's less about "happy," because "happy" has connotations of laughing and being ecstatic and it's not really about that. It's about being OK, or being able to get through it, or having those little moments of comfort that make everything else worth it.