"He has to put his political capital on the table to get it done." 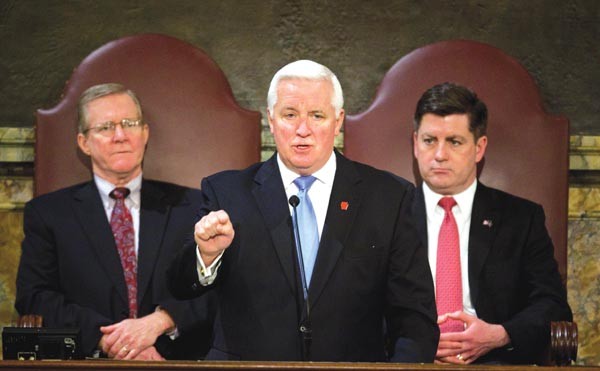 Photo courtesy of Pa. Internet News Service
Gov. Tom Corbett has fingers pointing back at him for avoiding the state's transportation funding crisis.

Lawmakers and transportation advocates were patiently waiting for Gov. Tom Corbett's Feb. 7 budget address to see if the governor would propose a funding solution for Pennsylvania's grossly under-funded roads, bridges and mass-transit systems.

Corbett made little mention of transportation in his address where he outlined a $27.14 billion spending proposal. While he noted it was "critical" that the state address transportation funding and that he had developed some "workable solutions," he didn't go much further.

"This is not a budget item," he said in his remarks. "It is too large for that. Transportation must be confronted as its own distinct and separate topic."

Lawmakers were left scratching their heads, many citing Corbett's own Transportation Funding Advisory Commission, which he put together last year. The commission offered a report in August with $2.7 billion in funding recommendations for roads, bridges and mass transit, but Corbett has said or done little publicly with the suggestions.

"It's inexplicable to me that he continues to avoid dealing with this, which is a fundamental issue in the state," says state Rep. Dan Frankel (D-Squirrel Hill). "It's completely irresponsible."

On Feb. 8, Corbett defended his budget on KDKA Radio to morning hosts John Shumway and Larry Richert, but said he wasn't "going to go into" a transportation plan during the interview. "We have to sit down and see if there's a will within the legislature to do something this year," he said. "This is an election year. Do you know how hard it is to get them to face very tough decisions in an election year?"

But some lawmakers say it's Corbett who has to take the lead, and that they are willing to work on a solution.

"A lot of people, Democrat and Republican, said, ‘We're in agreement with an awful lot of [Corbett's transportation commission report],'" says Rep. Joe Preston (D-East Liberty). "We'd be willing to support the ... commission's report, but here it is, seven months later and there's still nothing. ... Either we can try to do it or we can't."

"Not a single member [of the General Assembly] is going to run a piece of legislation unless they know they have the support of the governor," says Frankel. "It's ass backwards, quite frankly. He has to put his political capital on the table to get it done."

Frankel has put forward his own bill to support funding mass transit that echoes suggestions from the commission report. Frankel's bill would dedicate the entire $450 million annual payment from the PA Turnpike Commission to mass transit; currently, the funds are split between roads and bridges, and transit. He also suggests increasing the amount of state sales tax used from 4.4 percent to 6.4 percent to fund transit.

Ideas like Frankel's have the support of Rick Geist, the Republican chair of the House transportation committee, who notes that "there's a smorgasbord of ideas out there. We just have to put it together to make it a workable package."

Republican lawmakers won't go so far as to say they are frustrated with Corbett, but concede the governor needs to act. "I won't go badmouthing him, but I think he needs to step up and do his job," says Geist.

"I wish the governor would take one of the solutions his transportation-funding advisory suggested," adds state Rep. Jeff Pyle (R-Ford City), a member of the House transportation committee. "We need a signal from him on what direction he wants to go in."

His budget doesn't offer much indication. His proposal cuts overall transportation funding by nearly 9 percent, from $6.42 billion to $5.86 billion. That reduction, says Steve Chizmar, a spokesman for the Pennsylvania Department of Transportation, is partially due to the use of disaster recovery funds last year that were intended for the upcoming budget.

"Any time you have reduced dollars, you see impacts on the road. There are fewer transportation projects," Chizmar says. "Overall transportation funding has decreased over the years and there are always more projects than there are [available] dollars."

State funding for transportation took a severe blow when the federal government rejected Pennsylvania's application to toll Interstate 80, which knocked out a nearly $475 million pool of additional money and state assistance for the Port Authority of Allegheny County — which makes up 64 percent of its operating budget — has decreased over the years. Last year, the transit agency slashed service by 15 percent because of a budget deficit; this year, it's proposing a 35 percent service reduction and massive layoffs to make up for a $64 million budget deficit. The authority and the county, meanwhile, continually look to Harrisburg for a funding solution.

"I feel hopeful that [the state's efforts] are moving in the right direction. I, in no way, would say this is a done deal," says Allegheny County Executive Rich Fitzgerald. "There needs to be continued political support and lobbying for roads and bridges, with all of our legislative leaders. ... This is an important issue. It has true community, bipartisan, city-suburb support."

Geist says he doesn't believe Corbett will flex any state funds to the authority — a practice commonly used by former Gov. Ed Rendell — to avert the cuts. In 2011-12, the state budgeted $1.4 billion for intermodal transportation, which includes public transportation. Corbett's newest proposal reduces that number to just $1.35 billion, though it does call for a slight increase to the public-transportation line item.

Lawmakers, however, worry that that Allegheny County in particular can't afford for the state to wait much longer.

"It's a failure of leadership if [Corbett] doesn't come out aggressively to address it. It only gets worse by ignoring it," says Frankel. "We're facing a deadline of September, then we'll see the almost entire cannibalization of mass transit."