A thriller about political lobbying swaps out reality for entertainment 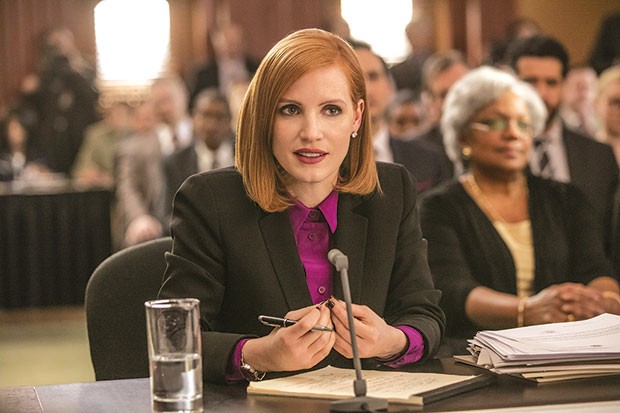 Miss Sloane (Jessica Chastain), on the hot seat
With talk of political corruption and undue influence back on the front page, it’s a timely release for John Madden’s lobbying thriller, Miss Sloane. The film opens with some no-duh background on the practice — how lobbying is a game of foresight, anticipating an opponent’s move and beating it: “Play your trump card after they play theirs.”

This insight comes from top lobbyist Elizabeth Sloane (Jessica Chastain), a chilly, brilliant ball-buster, who we meet pleading the Fifth Amendment at a Congressional hearing. We then flash back a few months, following as Sloane jumps from a big firm to a smaller shop working on gun control.

For Sloane, it’s the challenge of winning a tough fight. She’s hyper-competitive and addicted to her job, even as she is being dangerously consumed by it. In her sleek suits and vivid red lipstick, Sloane reads as a caricature of the sub-zero Power Woman, and there’s little attempt to give her any interior life other than some soap-opera shorthand: She pops pills, eats alone every night. (And yet, if Sloane were a man, would this presentation feel quite so demeaning?) Still, one of her trump cards is self-knowledge: If she is a ticking time bomb, then perhaps she can be detonated somewhere useful.

It’s a one-woman show for Chastain, who makes the unlikable Sloane eminently watchable, with back-up from reliables like Mark Strong, Michael Stuhlbarg and John Lithgow, plus relative newcomers Alison Pill and Gugu Mbatha-Raw.

Miss Sloane flirts with being critical about the actual collusion between corporations, lobbyists and government, but this is ultimately a melodrama; there are convenient twists, and if anything denotes that Sloane is not fact-based, it’s the hurtling speed at which this occurs. (The alligators in the real Washington swamp are very logy.) Fans of House of Cards should enjoy this — it has a similar focus on a take-no-prisoners maverick who stakes it all on being more conniving than the other devils in the room. And the “lobbying” here is entertaining movie-style spy craft, with tricks, disinformation and even a killing!