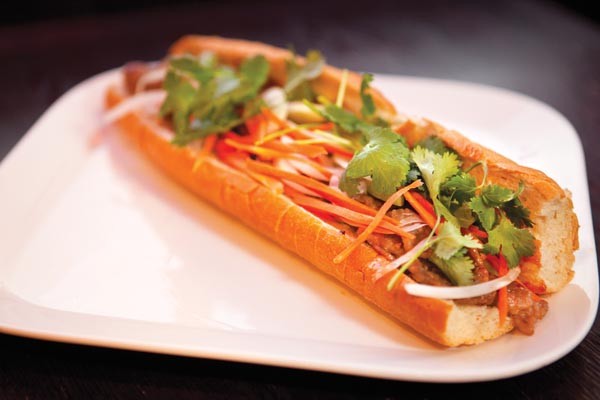 We've all heard the old saw, "If at first you don't succeed ..." The trouble is that, in the restaurant business, so many places don't succeed that it can be hard to try, try again. The family behind a trio of Asian restaurants, however, has found a way to make it work.

It started with Pho Kim 88, located on Route 88 in Castle Shannon, part of a rising wave of Vietnamese restaurants in the region. A few years later, a second branch opened near South Hills Village, Saigon 88, its nomenclature signifying its link to the original location as well as the good-luck associations of the number eight in many Asian cultures. Expansion, surely, is one measure of success, but we were holding out for an outstanding dining experience. Happily, that is exactly what we got at the little chain's third location, Miss Saigon 88, now open in North Oakland.

Like the restaurants themselves, the menus at the three establishments are related, but not identical. Not surprisingly, Pho Kim's has a well-developed pho list, while Saigon 88 puts an emphasis on its sushi bar alongside hot Vietnamese and Chinese fare. The newest, Miss Saigon, offers representatives from all these genres, including a full sushi bar, and throws some Thai curries into the mix. But the Vietnamese specialties are the real reason to go.

Banh khot, described on the menu as "shrimp mini-crepes," was a dish which disappointed us when we first tried it at Saigon 88, but wowed us at the Oakland location. More like fluffy mini-cakes than thin crepes, the khot were fully crisp on the bottom and tender on top. They paired well with plump shrimp that reposed atop each one, as well as numerous accompaniments: cucumbers, lightly pickled carrot and daikon, Thai basil and a bowl of spicy-sweet fish sauce. We liked it all wrapped in a lettuce leaf, the little crepe/shrimp core lending substance to all those vegetables and herbs.

Another banh dish, banh uot (pronounced "what"), also offered as an appetizer, was substantial enough for an entrée. Broad, chewy rice noodles were heaped on a bed of shredded lettuce and sliced tomatoes, topped with smoky morsels of moist chicken, and served with more of the spicy fish sauce on the side. The meat and noodles were exceptional, though the tomatoes highlighted the problem of off-season produce when tropical cuisine is served in northern climes. We're not sure what the solution is, but pretending it doesn't matter doesn't serve anyone well.

Sushi was, if a bit perfunctory, at least varied and affordable: At $2 per piece, nigiri options included surf clam and octopus, and there were plenty of baroque specialty rolls alongside the classic, straight-up fish-and-veg models.

An entrée of salted lemongrass tofu had just the subtle, elemental flavor its name promised and a wonderful, thin crisp exterior from its brief searing in hot oil. A sort of slaw of finely diced, sautéed onion, pepper and carrot lent further dimension to this dish, as did a tangy sesame-soy sauce.

Miss Saigon's chicken bun — a bowl of rice vermicelli noodles with meat, herbs and a bowl of that fish sauce for judicious application by the diner — was equally impressive. The chicken preparation was described on the menu as BBQ, but its tender meat and slightly sweet sauce made it seem like a classic, light stir-fry. Where the banh uot noodles were chewy, the vermicelli were a touch firmer, which made a nice base for the multiple toppings.

Last came Spicy Miss Saigon, a bowl of noodle soup both like and unlike pho: a red beef broth flavored with lemongrass and chilies, filled with bone-in pork and pliant udon noodles, and served with the usual aromatic pho toppings of bean sprouts, Thai basil, jalapeño pepper and lime. To be honest, we've never been very impressed by the pho at any local restaurant, but this bowl was sublime. Maybe the chilies and the lemongrass were unfair performance enhancers, but the soup was layered with flavors from two kinds of meat, vegetables, herbs and spices. Udon noodles offered their thick, resilient substance, and the pork, which seemed to be of at least three distinct cuts, had a robust, meaty flavor that was enhanced, but not hidden, by the broth.

Another old saw holds that the third time's the charm. In the case of Miss Saigon 88, eating is believing.