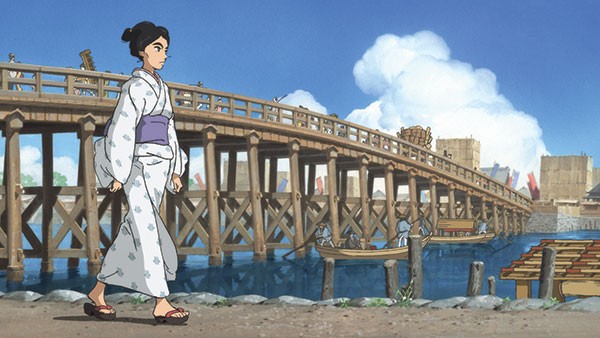 Screens in both Japanese, with subtitles, and English-dubbed versions. Oct. 21-22 and Oct. 24-26. Row House Cinema
As expected in Keiichi Hara’s anime about 19th-century Japanese artists, the visuals are quite lovely. The story, inspired by real people, centers on a young woman named O-Ei who lives with her well-known artist father, Katsushika Hokusa (you know his “Great Wave” woodblock). O-Ei is herself an accomplished artist, and she occasionally collaborates with her father. Besides erotica, they work on paintings designed to thwart various supernatural figures. There isn’t much of a plot — the film adopts a slice-of-life vibe, showing O-Ei putting up with her dad’s boorish friends, or taking her blind younger sister out on picnics. Implicit, but never stated, is how impossible it would be in 1814 Edo (now Tokyo) for a young, independently minded single woman to have a career as an artist. Though she does paint in secret, O-Ei’s reward for her artistic soul is more existential — drawing pleasure from the world’s beauty, which doesn’t escape her sensitive eye.