For barebones productions' return to its Braddock theater after two years away, Misery comes in the form of a William Goldman play based on the famous Stephen King novel, paired with the company of a pop-up speakeasy bar that will be open before, during, and after all shows.

Misery, showing May 13-June 5 and directed by barebones founder Patrick Jordan, promises to be "cathartic and wildly entertaining," with Pittsburgh veteran performers David Whalen and Sheila McKenna starring as a romance novelist and his obsessed fan, originally played by James Caan and Kathy Bates in the story's film adaptation. 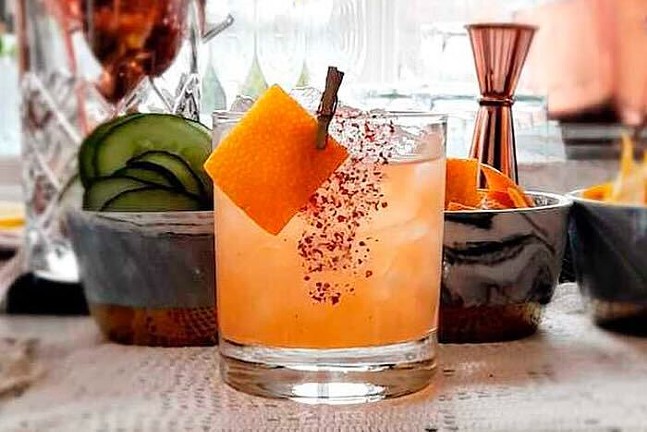 Cocktail from Lo Bar
The pop-up speakeasy, from Pittsburgh mobile-bar company Lo Bar, will be held in a familiar venue, the former location of Superior Motors. Expect a mix of cocktails and mocktails from Lo Bar and Goodlander, beer from the Brew Gentleman, and a variety of wine and sparkling drinks. barebones says Lo Bar will be tailoring some cocktails around Misery, and will have a secret drink available by password only to theater guests. Chef Kate Romaine's popular catering company, black radish kitchen, will also host a pop-up brunch buffet, which will be open to the public, for the first three Sunday afternoon matinees.

Misery itself will take place in barebones blackbox theater's Bingo O'Malley Stage, a new-and-improved venue, with recently installed medical-grade HVAC and filters to ensure the safety of its audience and performers. The production will include a prop from the company that made the T-Rex in the original Jurassic Park film and special effects from award-winning special effects makeup studio TolinFX, which barebones promises to be "a bloody good time — literally."

During the pandemic, Jordan produced over a year of live-streamed talk shows, where he gave a wide range of performers and community members a space to perform, talk, and be together during the shutdown. He also debuted his first-ever live virtual play, Will Eno’s troubled comedy Tragedy: a tragedy. But he's now ready to get back to in-person events.


“A lot of people were pushing us to do a comedy for our first show coming out of Covid,” says Jordan in a release. “We searched high and low and read hundreds of plays while we were unable to have live shows and nothing was landing. And then it hit me, ‘if you can’t beat ‘em join ‘em!’ Misery is a cult classic and staring our feelings in the face is always what we’ve done at barebones. It’s cathartic, while still being wildly entertaining, and that’s what we’re after. Misery is intense, funny, twisted, and even, at times, touching.”
Misery. May 13-June 5. barebones blackbox theater, 1211 Braddock Ave., Braddock. $40. barebonesproductions.com