Despite its limitations, the film is at least thought-provoking about something of importance. 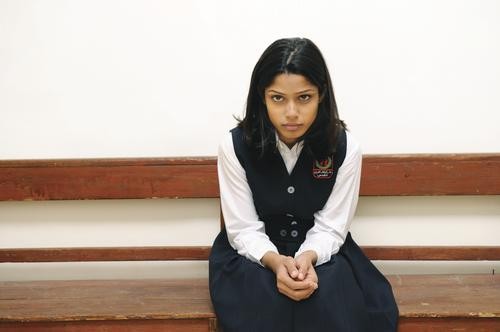 History is a sequence of events, each one cascading inelegantly into the next, creating unstoppable consequences that become a set of indelible truths. Did anti-Semitism help bring about the British Mandate and the state of Israel, which led to the displacement of the Palestinians, and the decay of their spirit and culture, which led to the Intifada and to Islamic radicalism?

On its surface, Julian Schnabel's Miral isn't nearly that deep or complex. Yet despite its limitations, it's at least thought-provoking about something of importance.

Miral opens in 1947, at the American Colony Hotel in Jerusalem, as an American woman (Vanessa Redgrave) hosts a Christmas party for her interfaith circle of friends. Her gala is an oasis for all, and she asks them to put politics aside. Cut to 1948, when the mandate becomes a reality. Conflict breaks out immediately, and Hind Husseini (Hiam Abbass) opens an orphanage to make sure that the Palestinian children of war grow up educated and safe. Her story is true (she died in 1994), and her orphanage still exists.

The story then skips through history, rounding up the usual arguments and dilemmas, before getting to Miral, a Palestinian girl -- played, at age 17, by Freida Pinto of Slumdog Millionaire -- raised among what her culture sees as the Israeli occupation. She flirts peripherally with radical solutions, and she befriends a Jewish girl in love with Miral's cousin (circa early 1990s).

This is all very didactic, and because it's not incendiary, it's also a little dull. It doesn't help that the gifted Schnabel (Basquiat) dedicates Miral to people "on both sides who still believe peace is possible." That's a lovely sentiment, but he might have chosen to leave us with a declaration that peace is inescapable -- a mandate, if you will. Now that would be incendiary.

Schnabel simply wasn't the right person to helm this reluctantly optimistic film, which certainly would have benefited from the insight of an Israeli or Palestinian director (or both). Rula Jebreal wrote the screenplay based on her book about Husseini, and her dialogue is simple bordering on simplistic. Having most of the dialogue spoken in English, when it should be in Arabic, doesn't enhance its authenticity, nor does Tom Waits croaking a song at the end.

"How can you kill someone you don't know?" one woman asks another who has just detonated a bomb. Good question -- and a story in itself. But the film's most compelling argument for peace with Israel passes too swiftly when a Palestinian man says: "They're not going anywhere, and neither are we." Q.E.D.?

Directed by Julian Schnabel
Starring Frida Pinto, Hiam Abbass, Alexander Siddig
In English, and some Hebrew and Arabic, with subtitles
Now playing at the Manor